Today's post is truly a treat for any epicurean.  We recently scored tickets to dinner at Alinea, Chef Grant Achatz' (rhymes with "jackets") critically acclaimed restaurant in Chicago that holds 3 Michelin stars and is ranked #9 in the world.  To dine at Alinea, you buy "tickets" 2-3 months in advance and pay for your meal in full ahead of time.  The meals are fixed per-person prices depending on that day's menu.  This works out well for the restaurant, of course, but also for the diners because you only have to think about whether you want to add on a supplemental course, cocktails, or a wine pairing the day of your dinner.  If you are not successful 2-3 months in advance of your desired date when that day's tables are released, don't give up.  Alinea also releases tables via Twitter or Facebook--often same day or the same week.  I know that there are many reviews out on the web of Alinea, but this restaurant has been on our list for some time since we decided to work our way through the World's 50 Best restaurant list.  We jumped at the chance to fly to Chicago Halloween weekend to dine at Alinea and also see the city, and I hope you will enjoy my take on dining at Alinea.  Please read on for photos and details of our amazing meal. 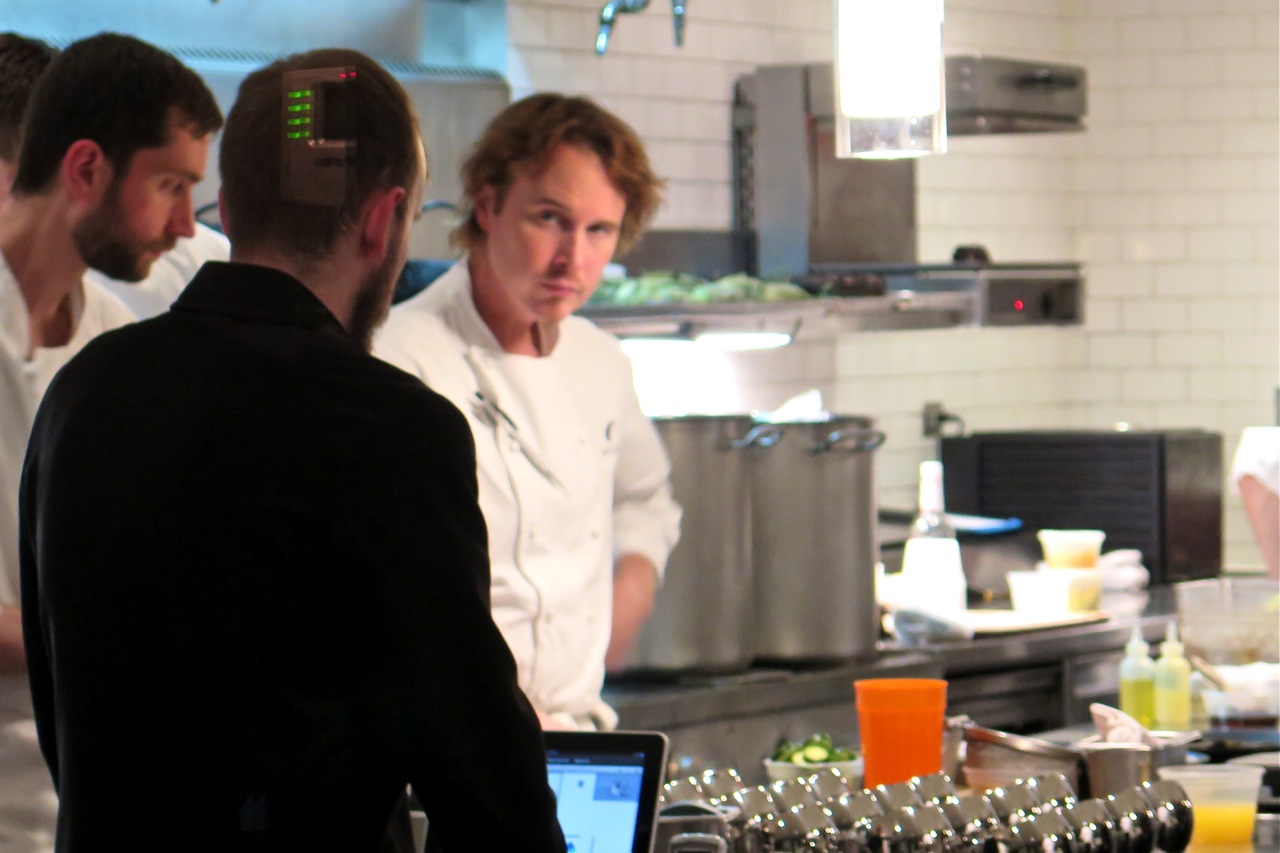 Spying on Chef Achatz when we first arrived.  The kitchen is downstairs, and the dining rooms are both downstairs and upstairs.  Our table was in one of the upstairs rooms, but we were able to take a peek into the kitchen when we first arrived and checked out coats.  The kitchen was organized and efficient--everyone was swiftly executing their assigned tasks like a well-oiled machine.  We were excited that Chef Achatz was on site that day, because he had previously been in New York and we were not sure if we would get our chef celebrity sighting. 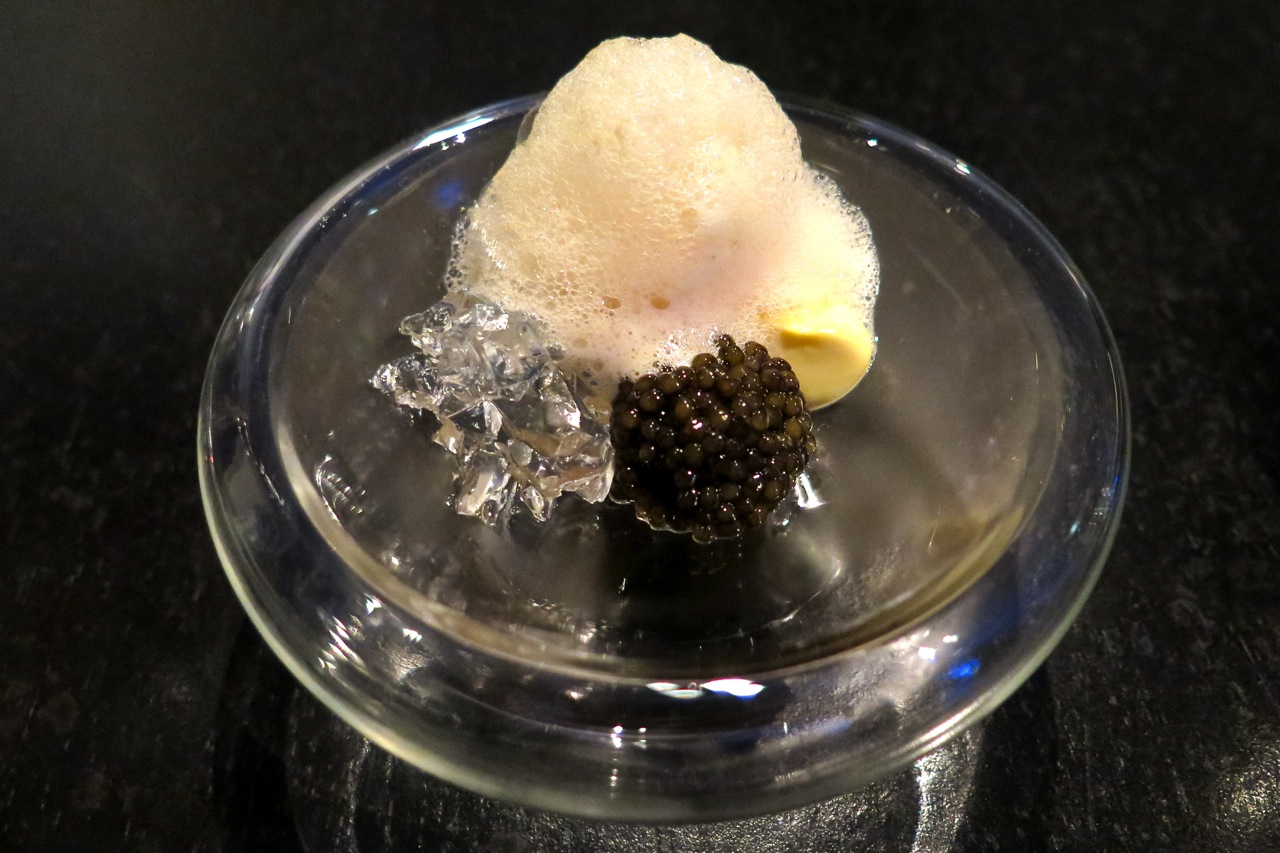 Osetra caviar from the Osetra sturgeon, only slightly less expensive than Beluga caviar.  This was served with a glass of Pierre Moncuit Blanc des Blancs Brut NV. 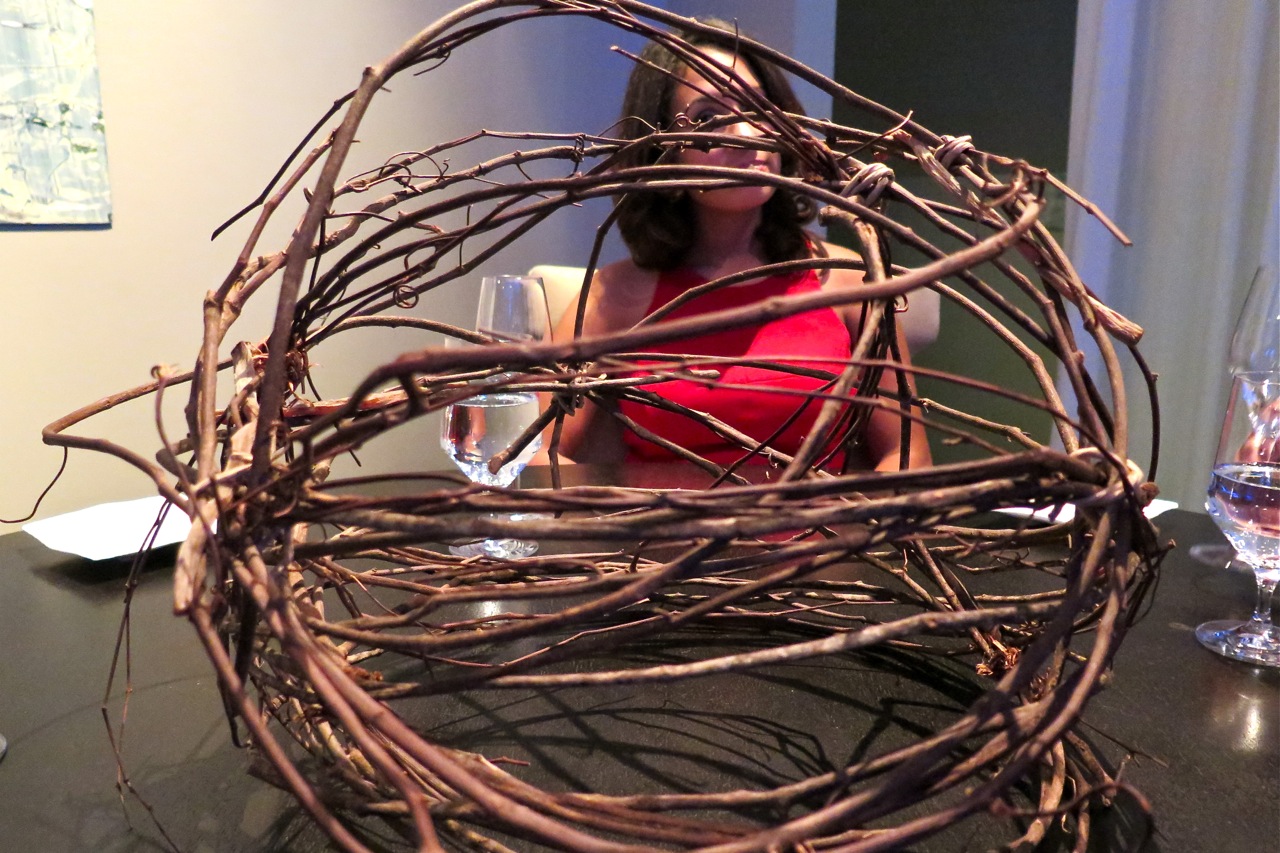 Salsify "Branch Camouflage." This "nest" of twigs and branches was brought to the table, and we were tasked with finding the four pieces of salsify, which is an edible root that looks like a twig itself. 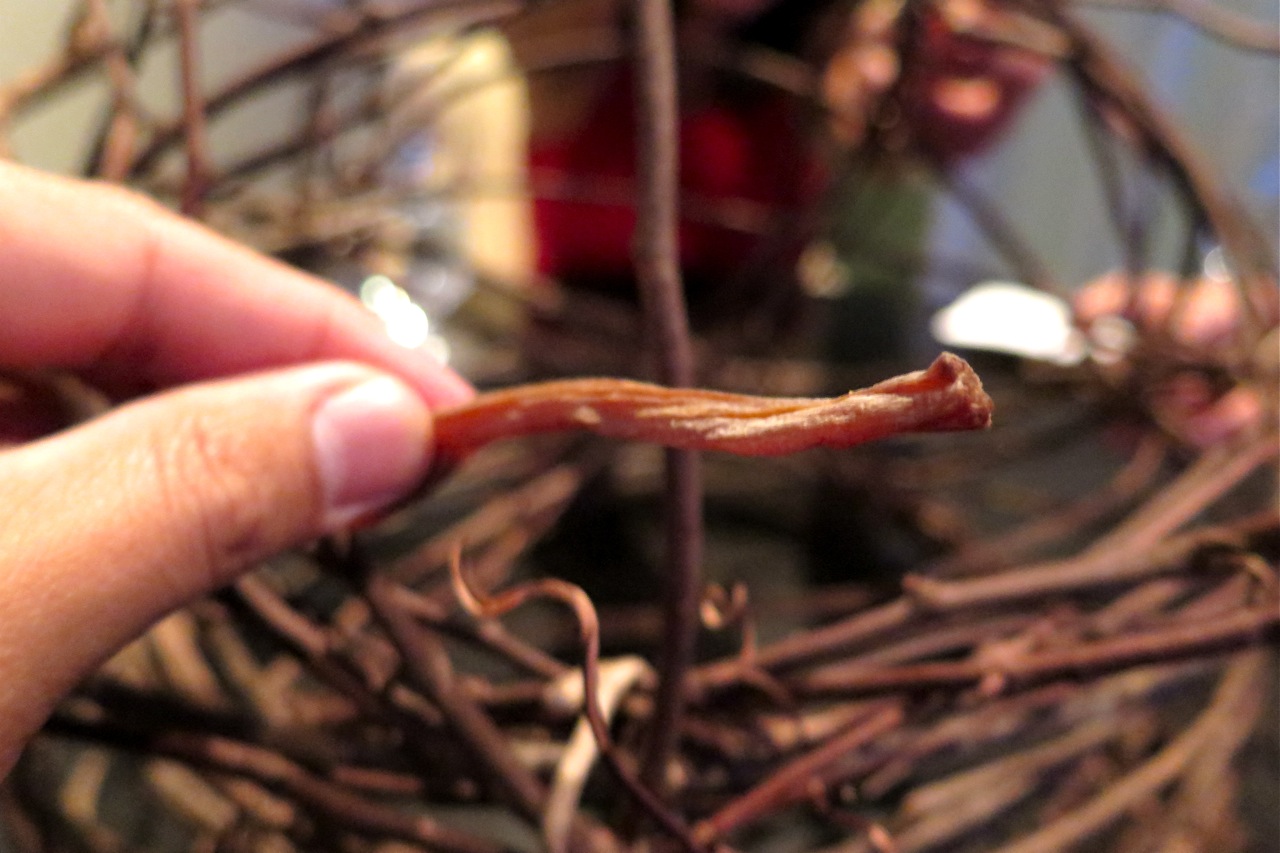 One of the pieces of salsify found in the twig basket.  This root had been soaked in chili and sugar, so it basically tasted like jerky. 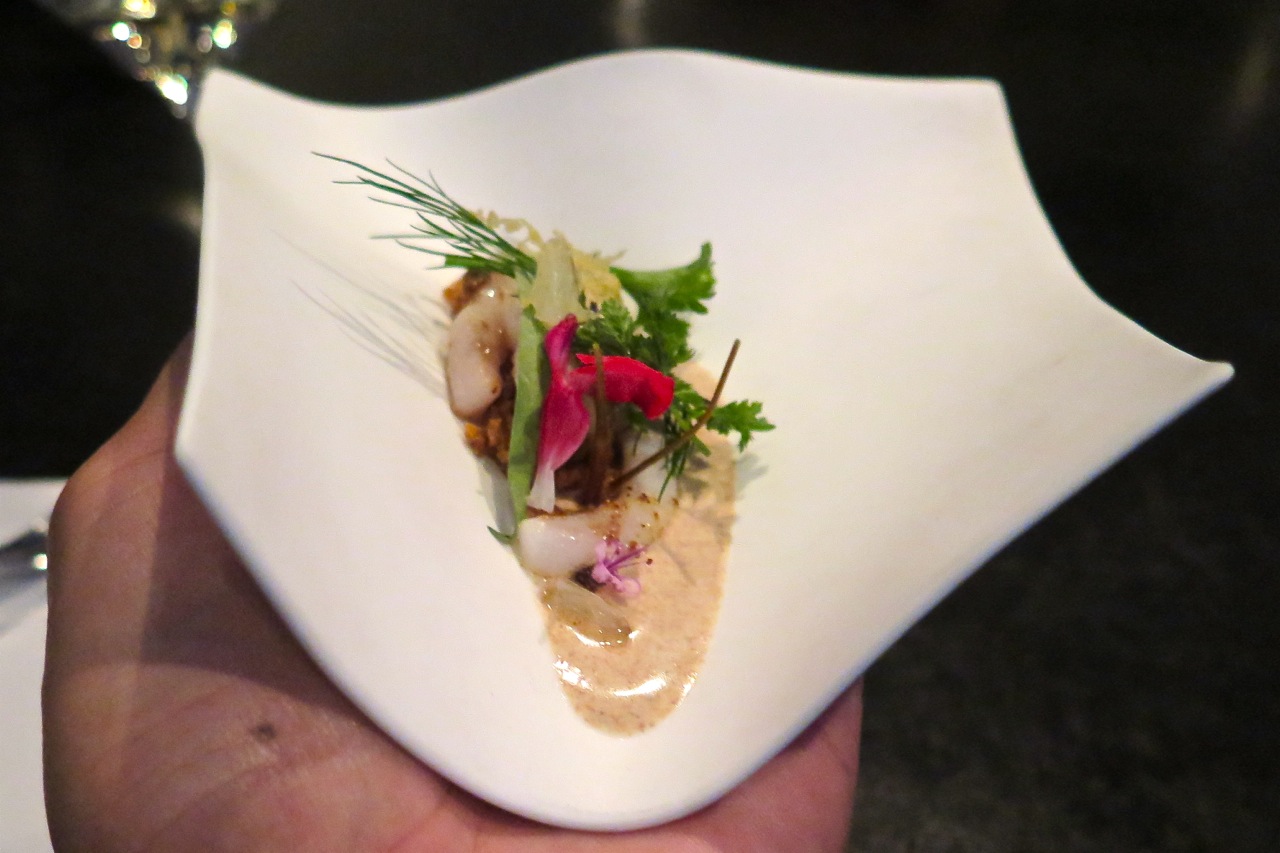 Skate fish with a brown butter, lemon, and herb sauce served in a palm shaped plate. 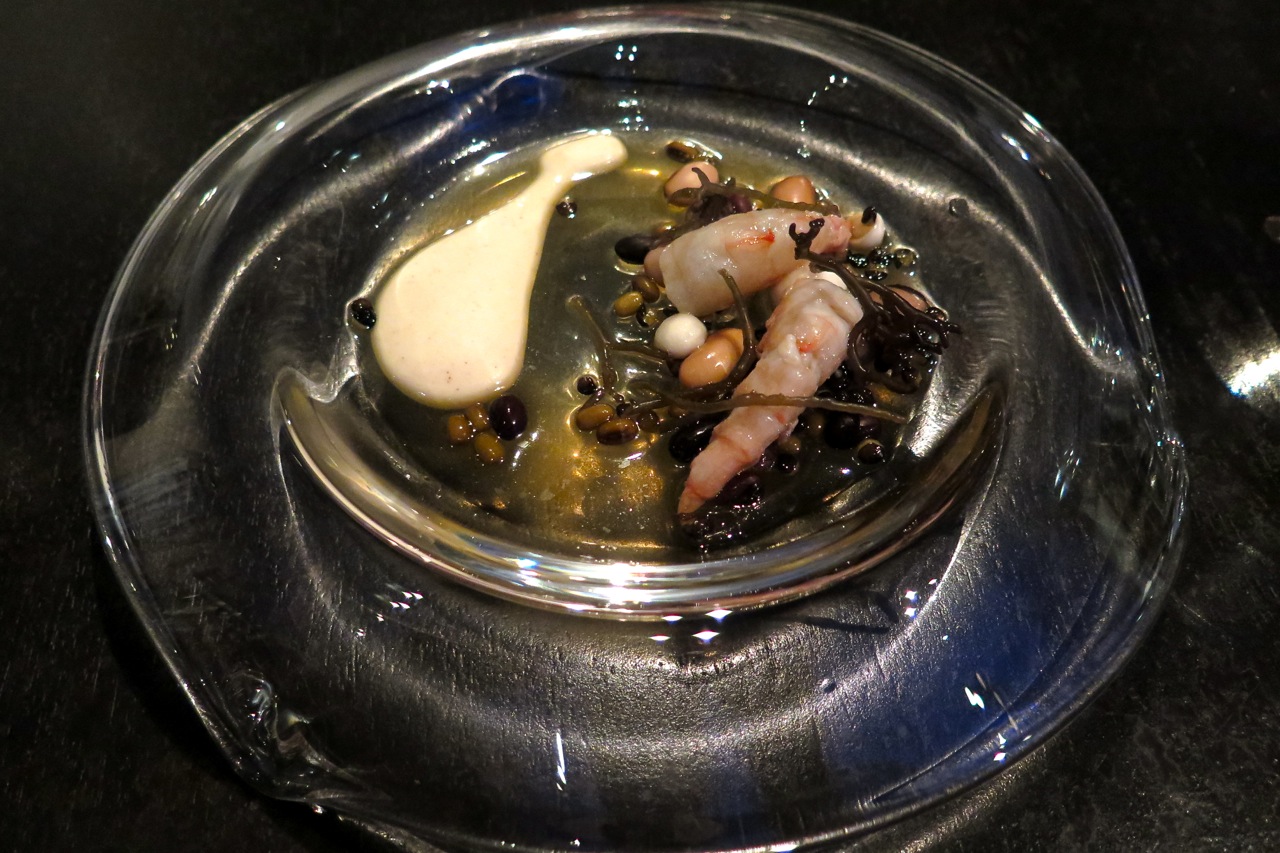 Ebi (shrimp), ogo (edible seaweed), clam shells, and several types of bean "pebbles" for a dish with an ocean/sea feel. 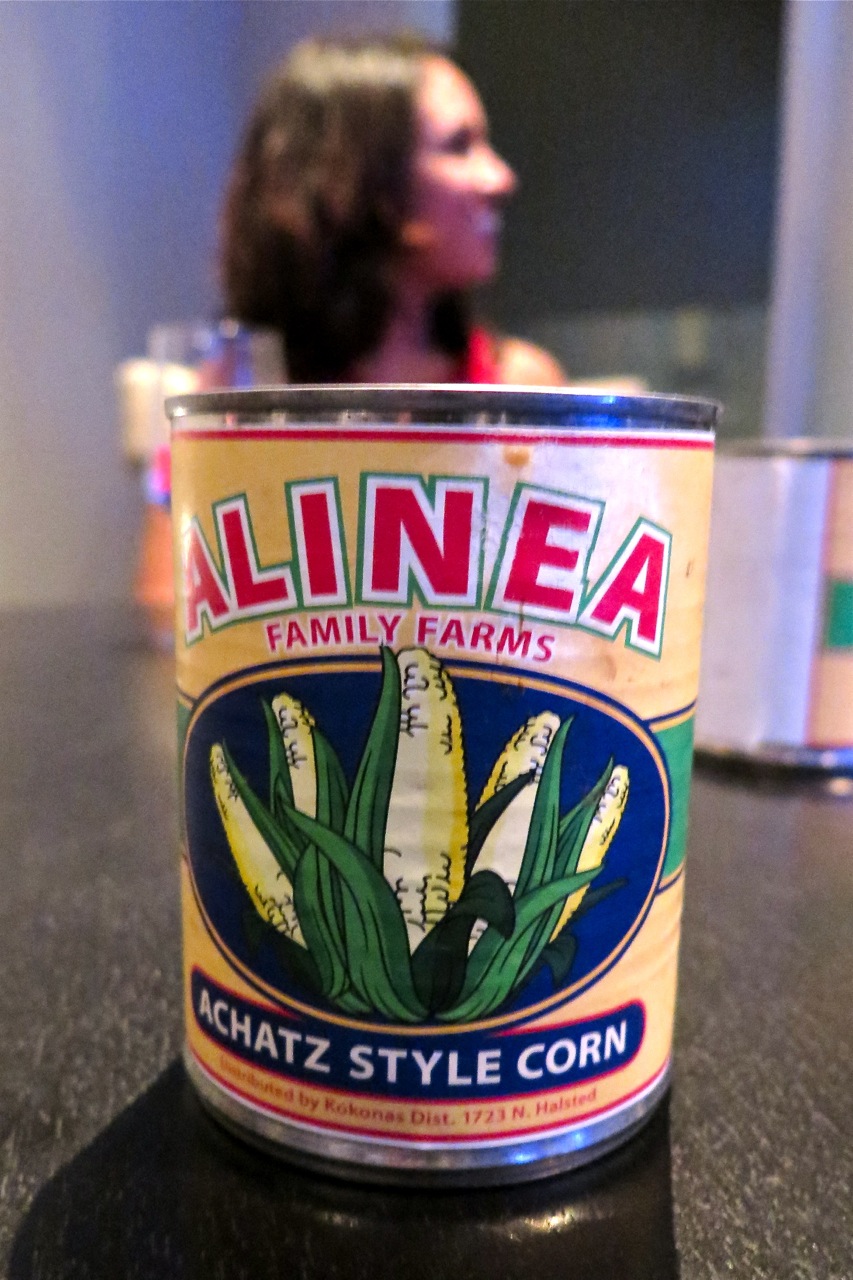 Setting up for the next corn dish. 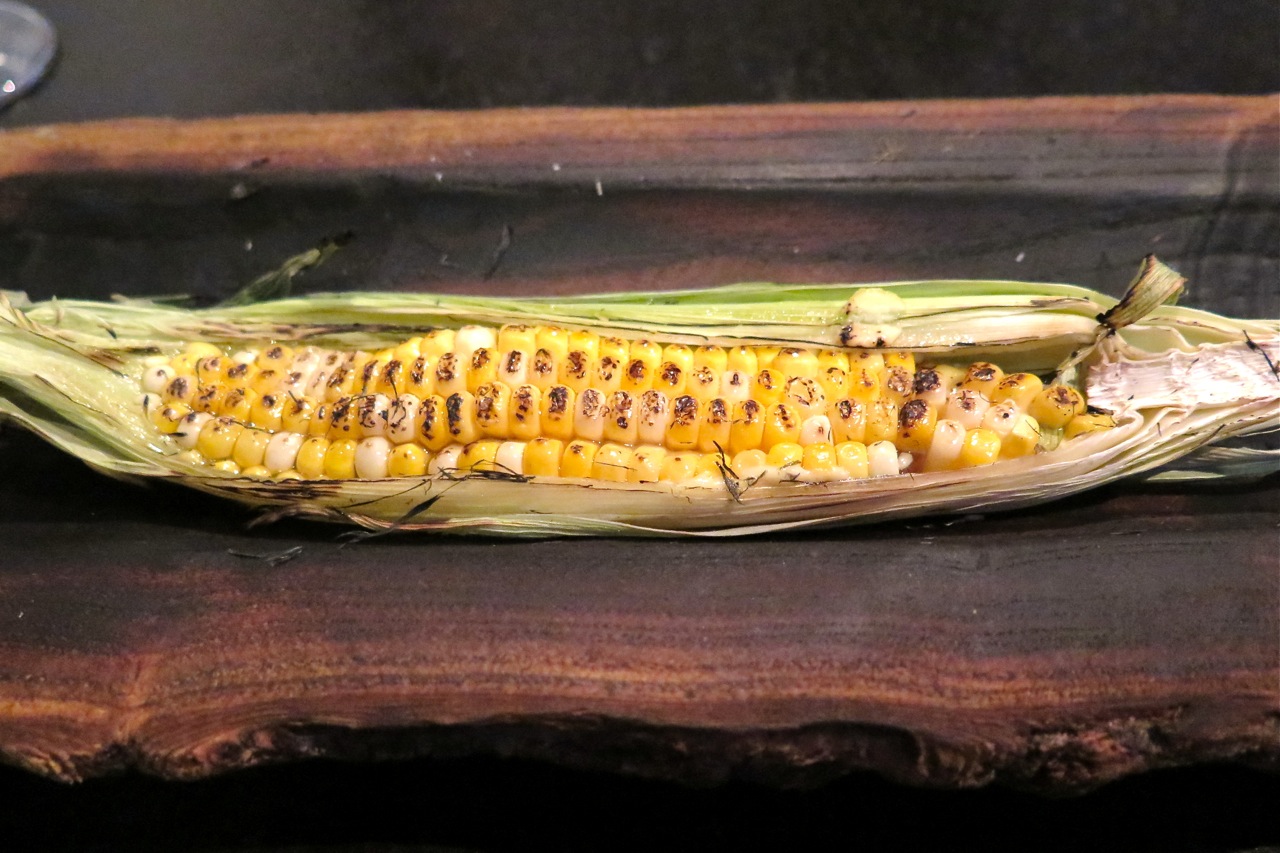 This dish looks like corn on the cob, but it is so much more.  The top layer is the charred corn kernels, but underneath is a bed of corn grits with truffle, manchego, and sherry.  So good! 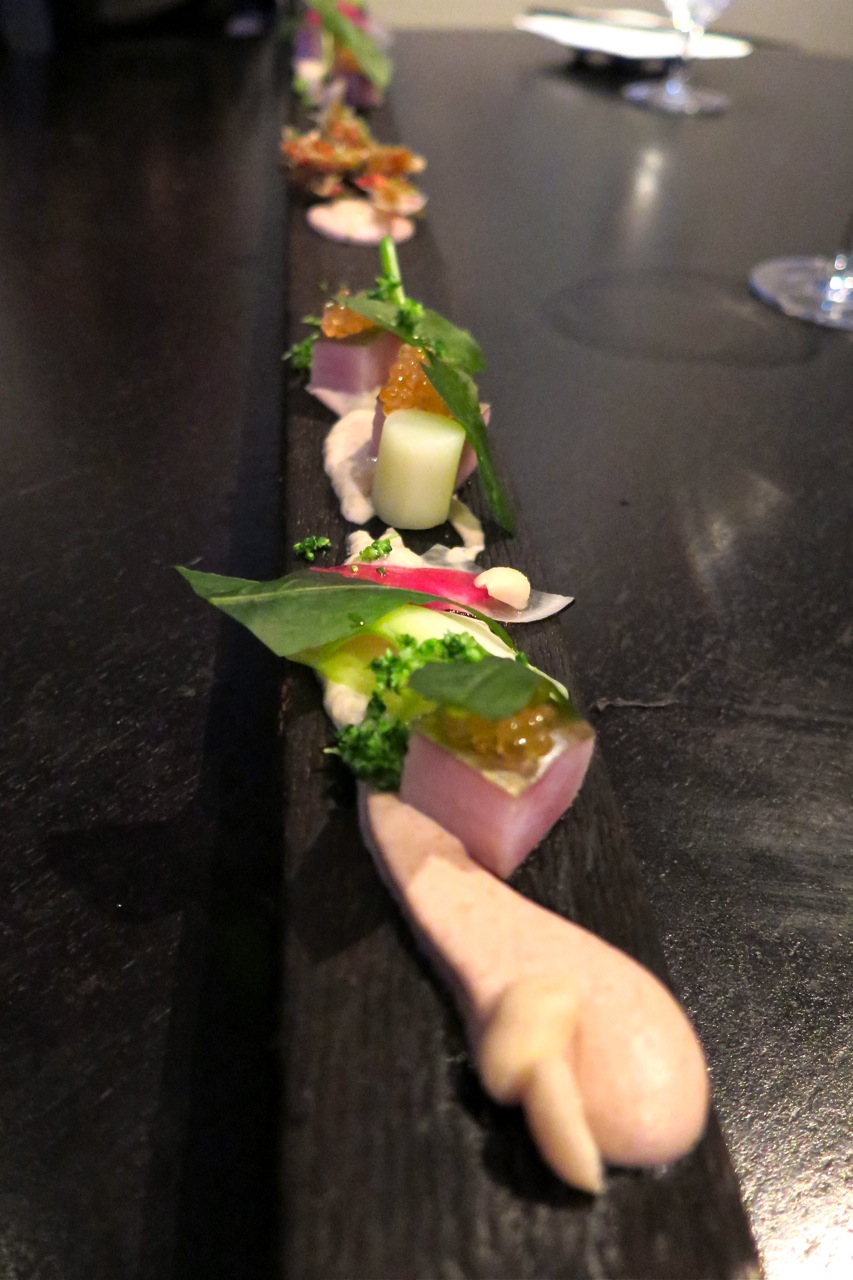 Cubes of raw trout with white pepper, vietnamese coriander, and broccoli.  The trout bites were served on a piece of wood cut from a bourbon barrel, which added a sweet flavor and aroma to the dish. 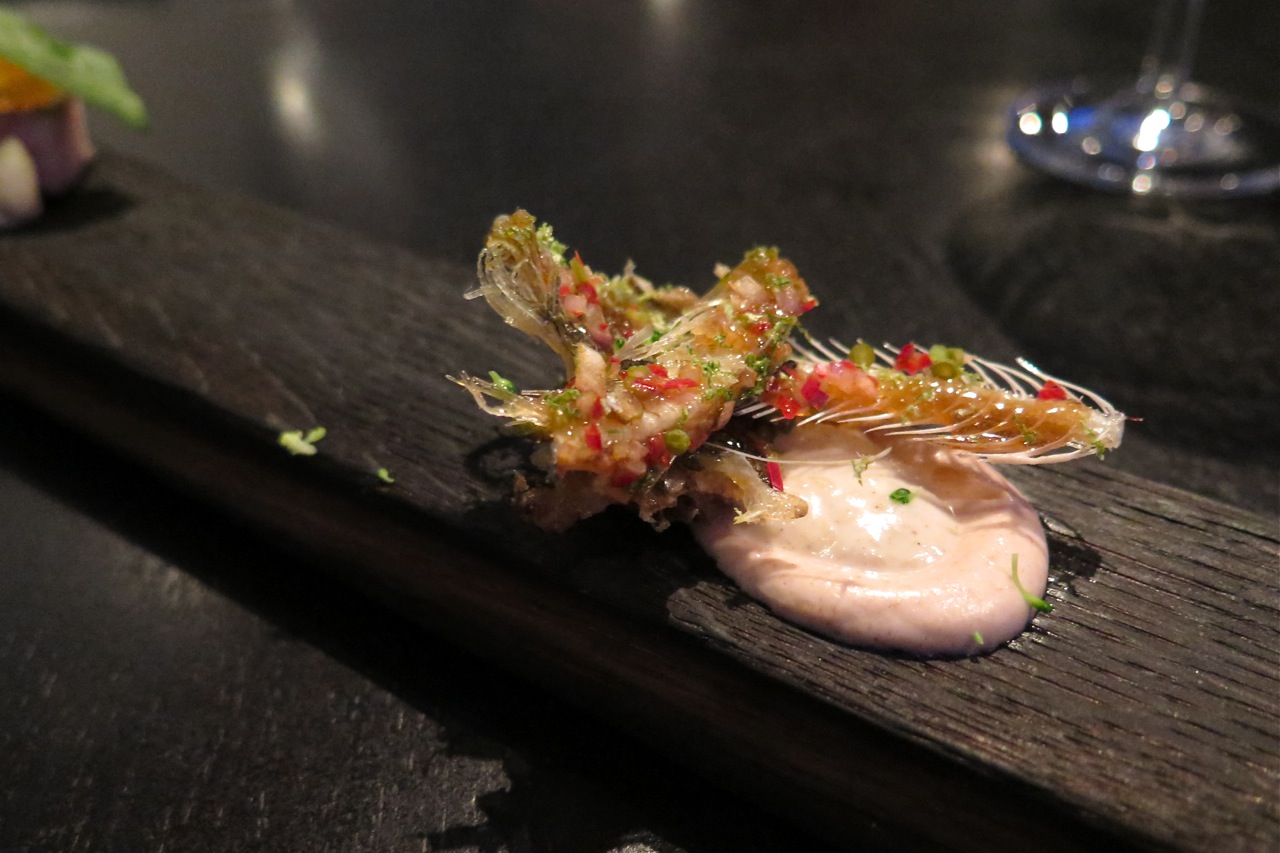 The trout bones were situated in the middle of the wood slab, they were crispy and totally edible.  I tried a little bite, but have to admit the bones were not my favorite. 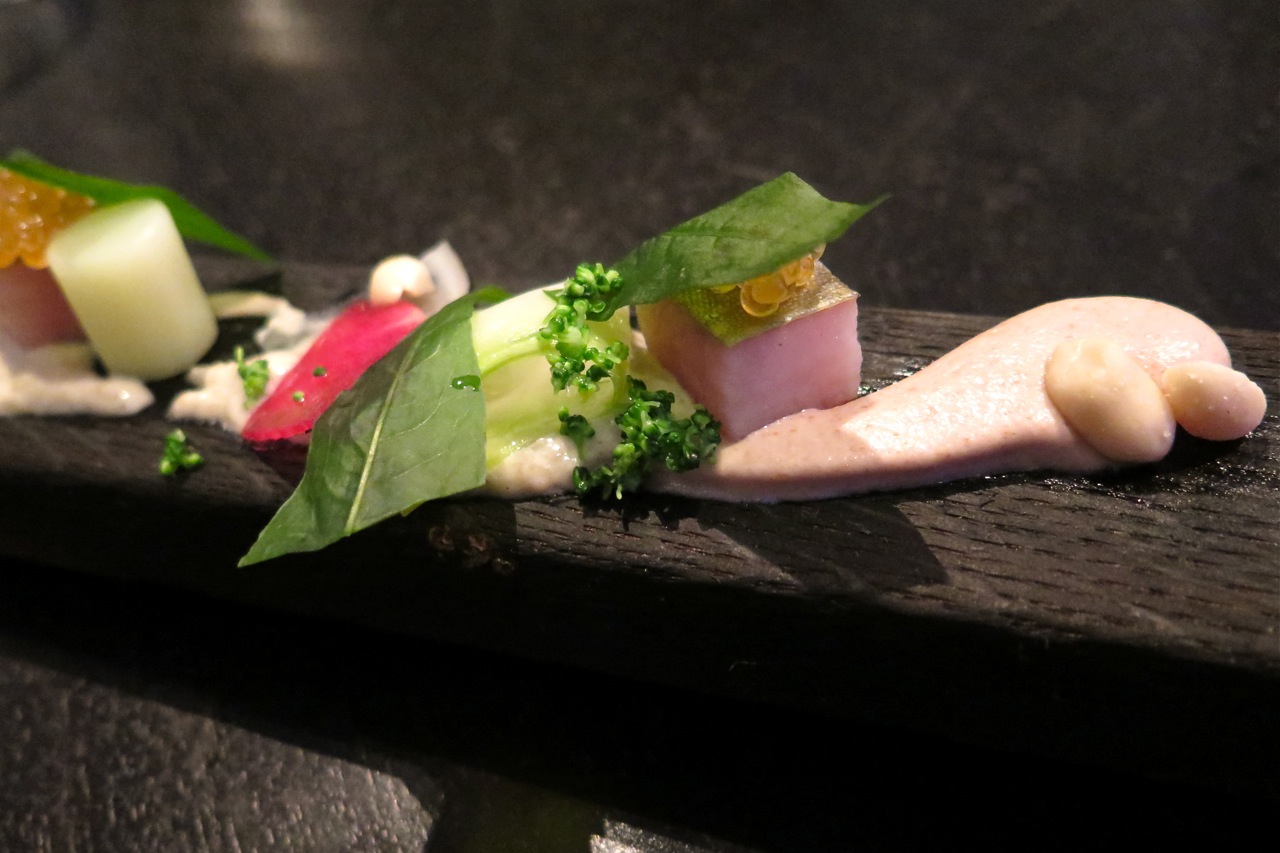 One more close up of the trout. 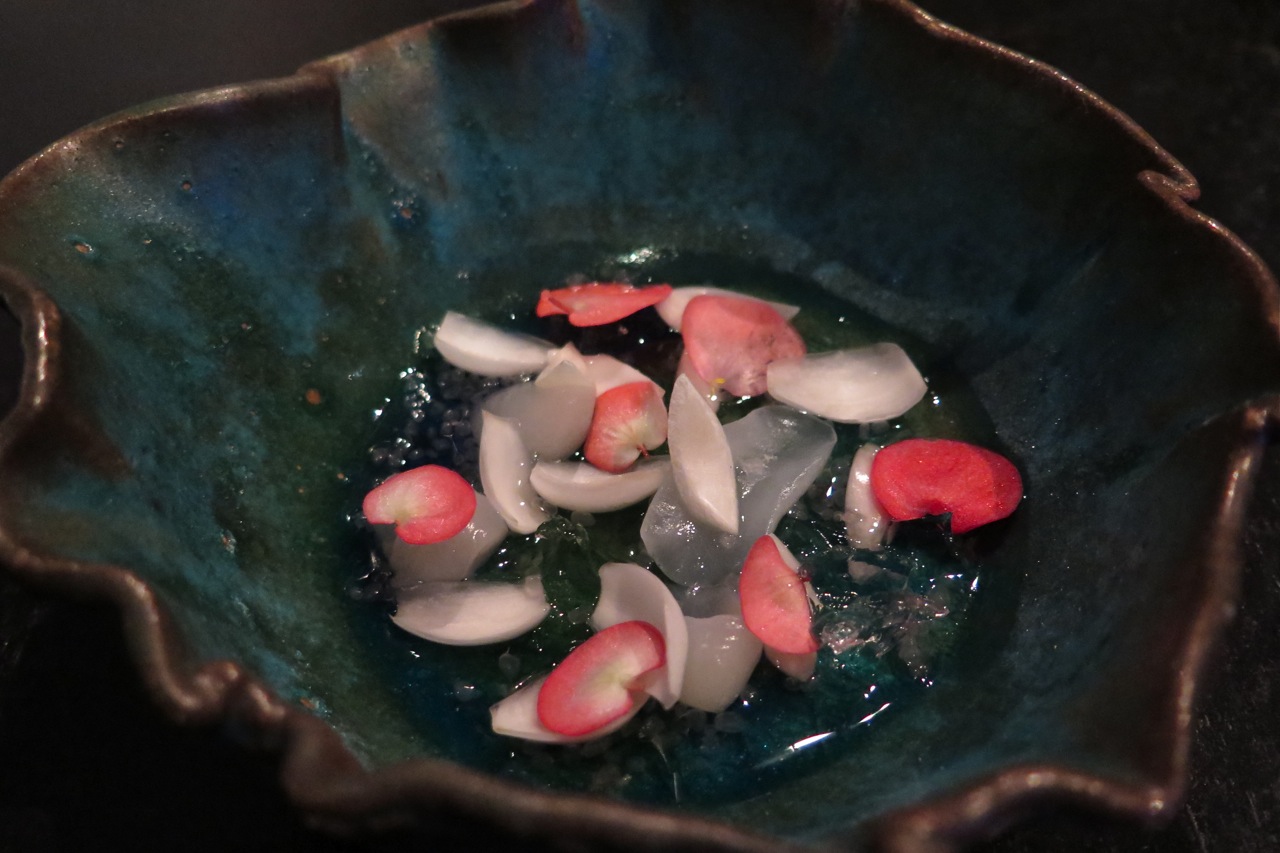 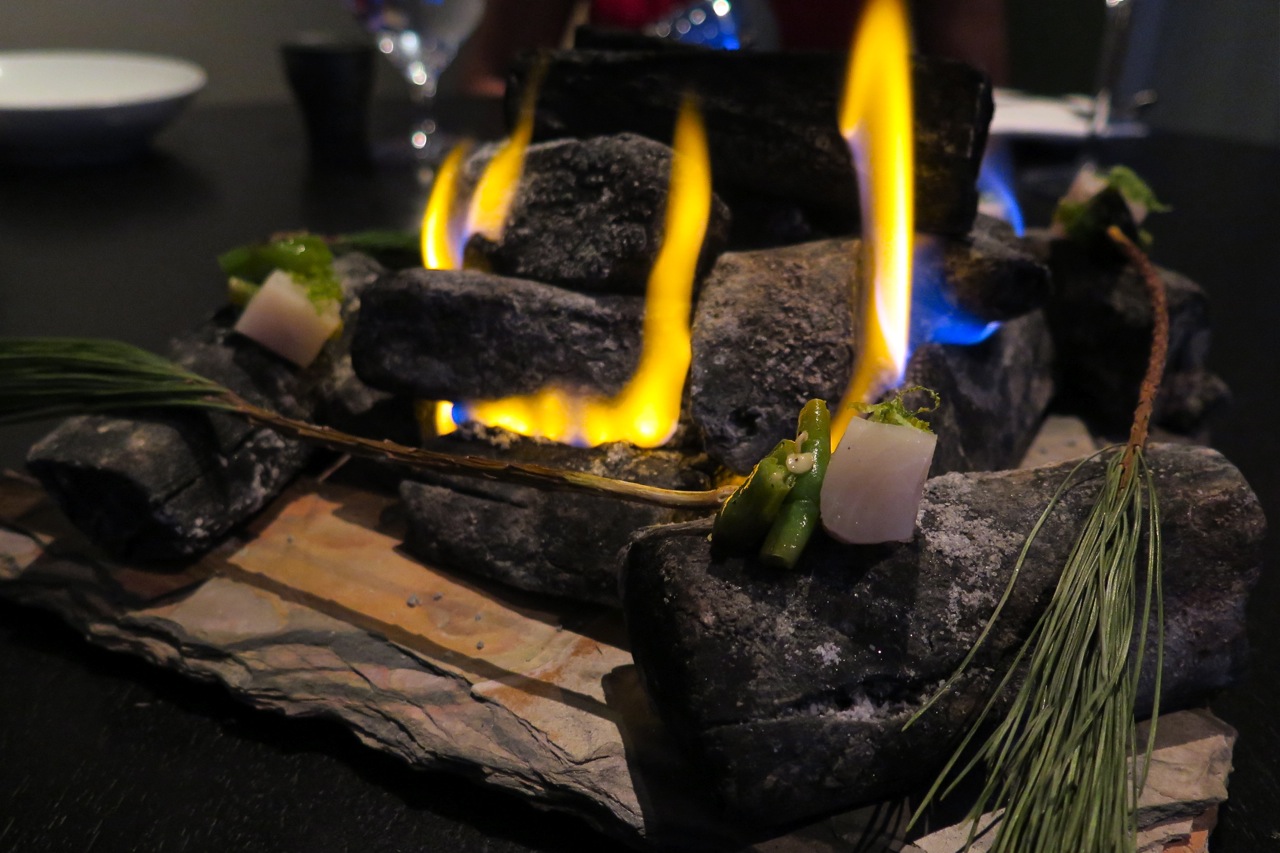 Hamachi "smores" with shishito pepper, bean, and served on a pine branch.  This was a fun little activity - we "toasted" the hamachi over the flames for a few seconds before eating this tasty bite. 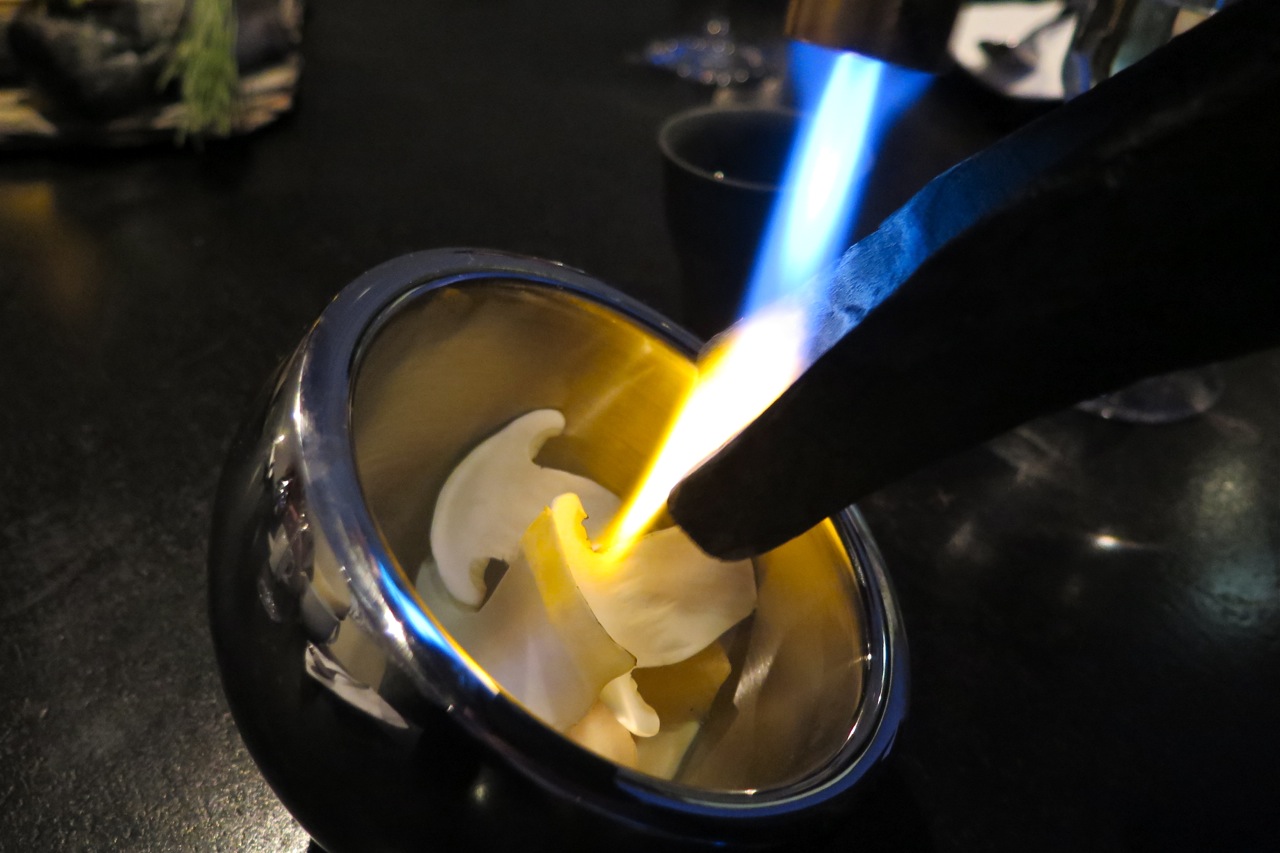 The next dish was also served immediately: matsutake mushrooms with pine, abalone, and tapioca.  The staff toasted the mushrooms with a blow torch as well.  I am not the biggest fan of mushrooms, but this dish was very good! 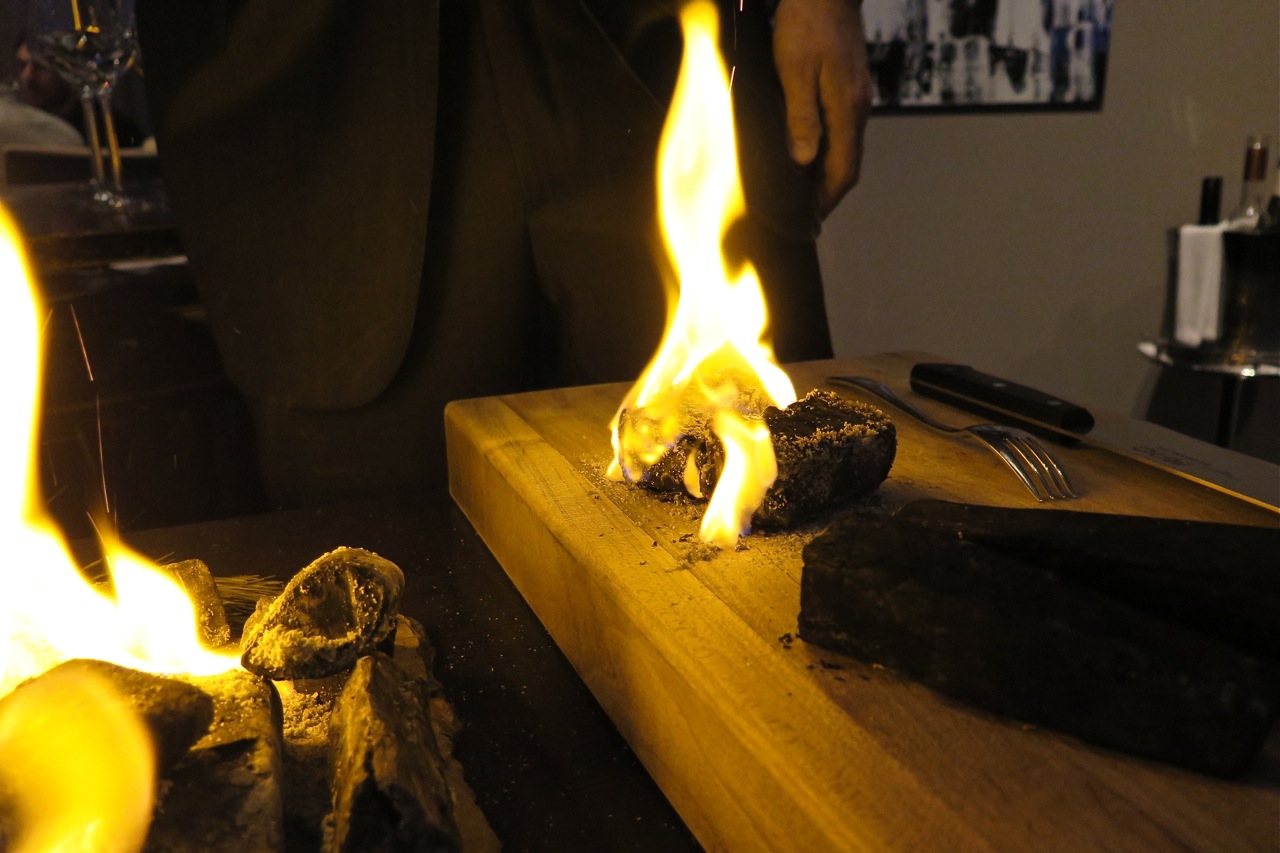 Next up was our surprise dish of the night.  When we toasted our hamachi over the flames, we thought there were just coals on top of the block of wood.  However, those "coals" were hiding our next course. 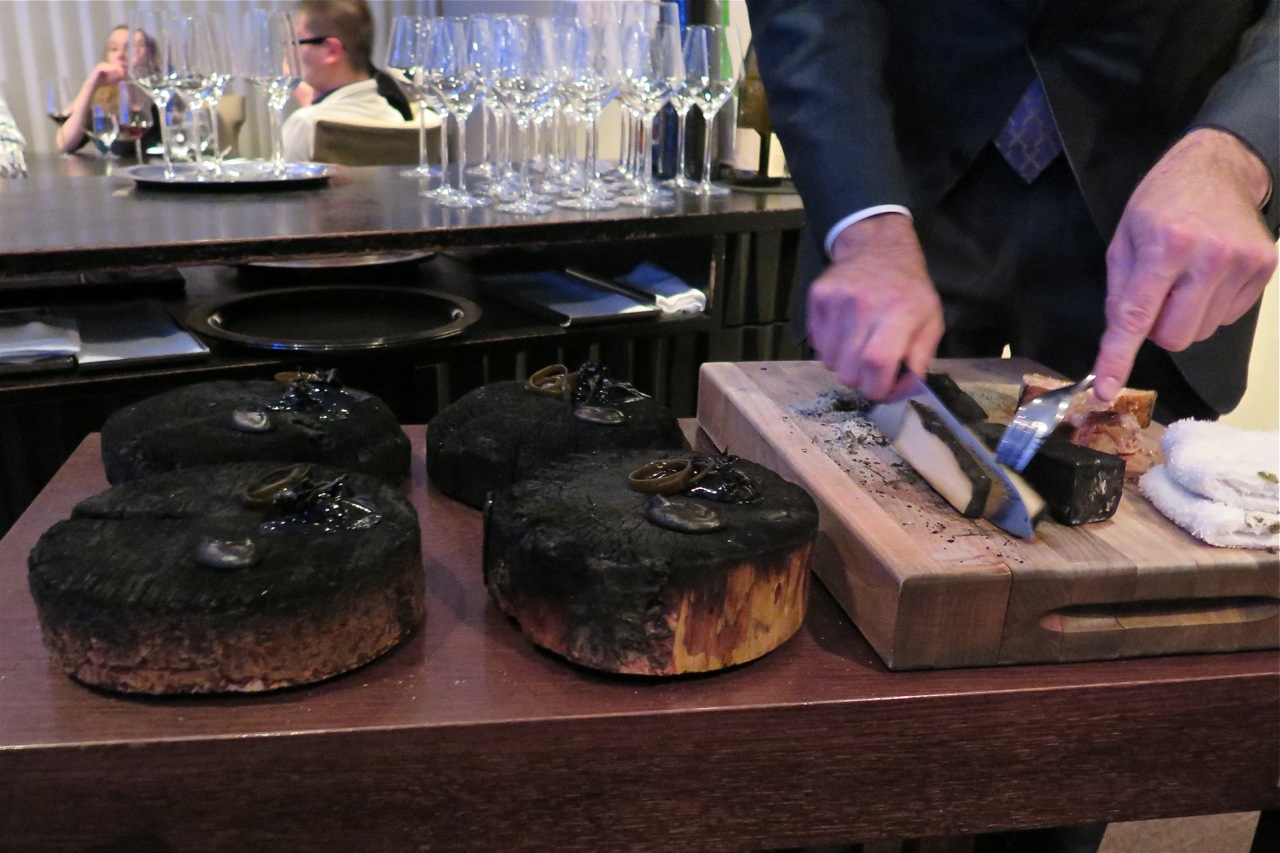 The staff uncovered chunks of pork belly and parsnips by cutting away the charred edges. 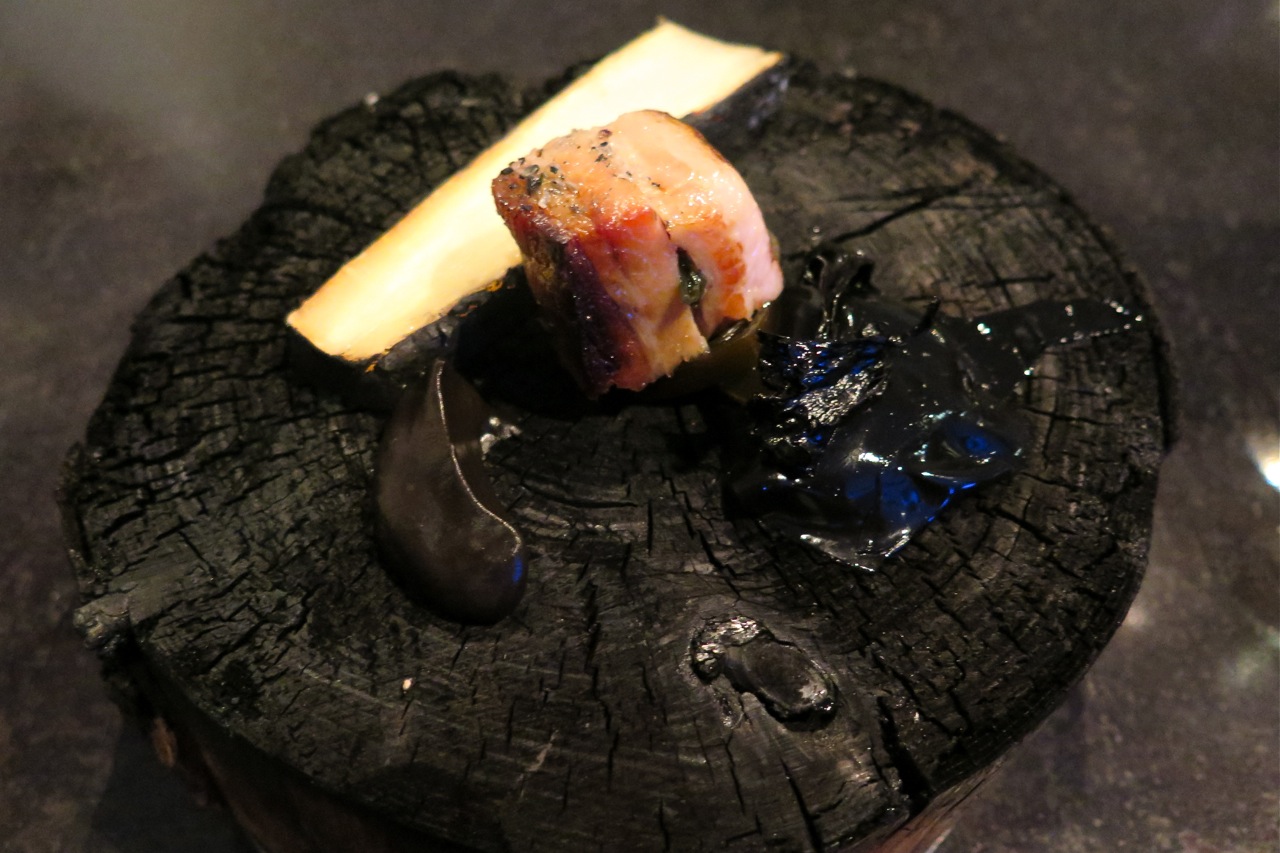 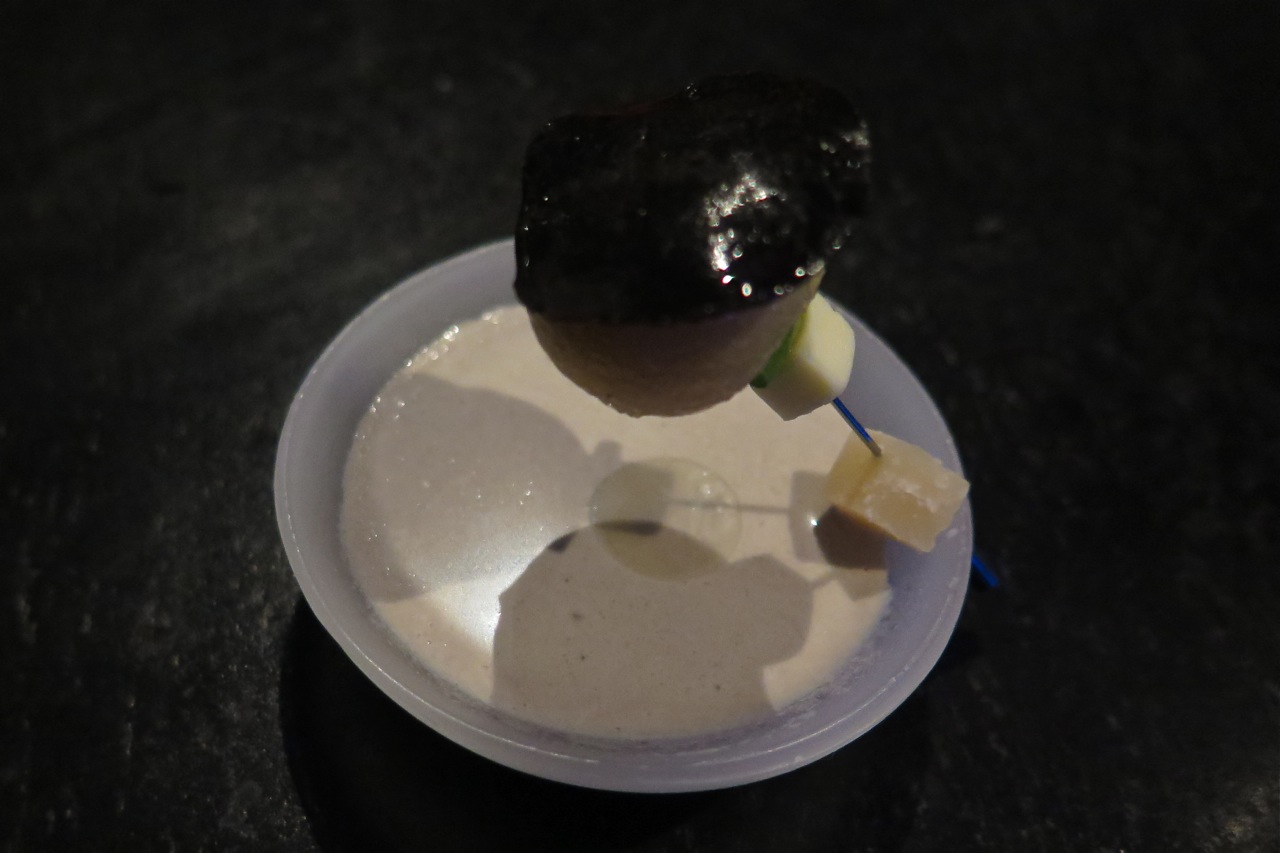 "Hot Potato:" a classic Alinea dish.  It's a little hard to see, but there is a cold potato and black truffle  suspended by a thin metal rod over a cold potato soup made with black truffle and butter.  We were instructed to remove the needle so that the cold potato and truffle immersed in the soup, and then drink the dish in one bite like a shooter.  These shooters were so rich and tasty - when we saw trays of them going by we kept trying to get the staff to give us another round. 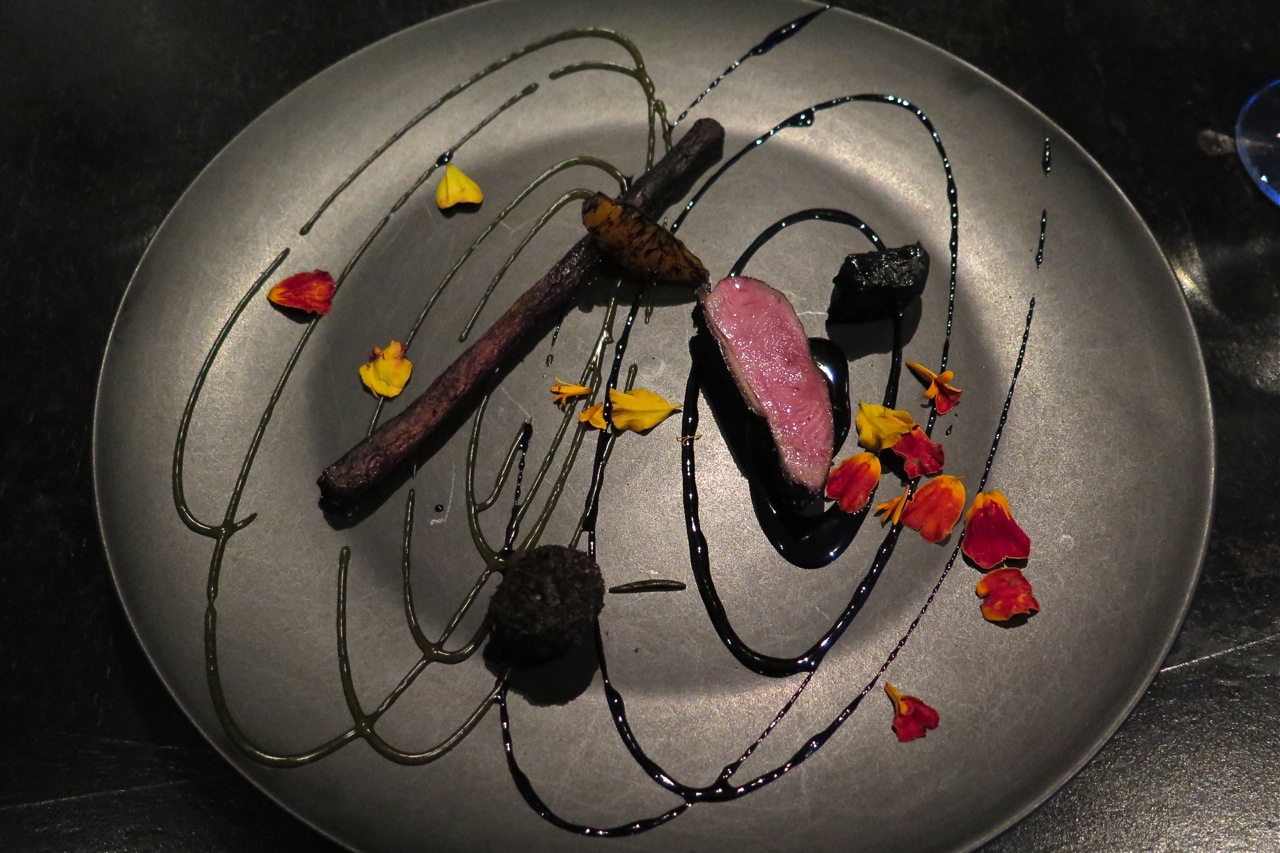 Tender squab with beet, and orange in a sweet, dark sauce. 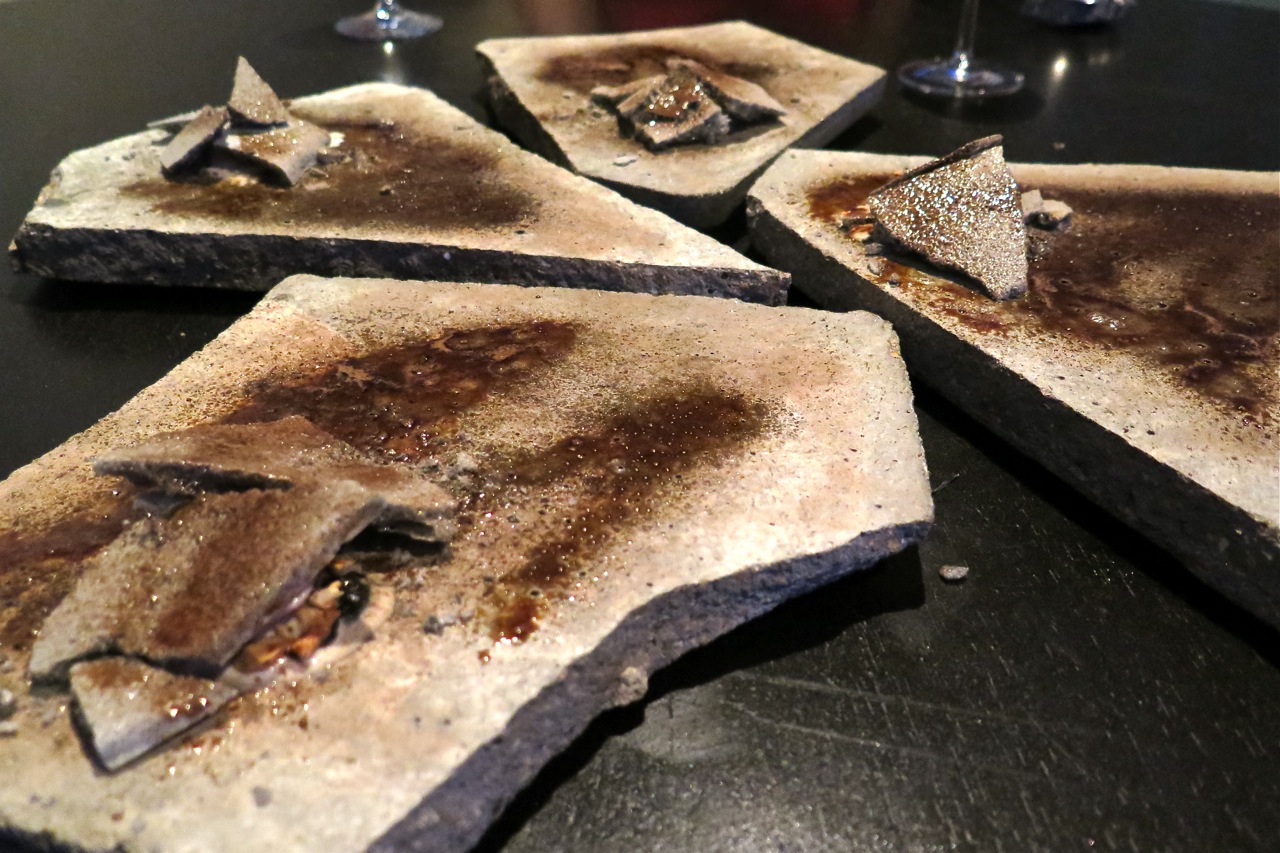 "Graffiti:" an edible chalky consistency "concrete" (meringue maybe?  I don't have the details unfortunately) with hazelnut and perigord truffle sprayed with balsamic vinegar. 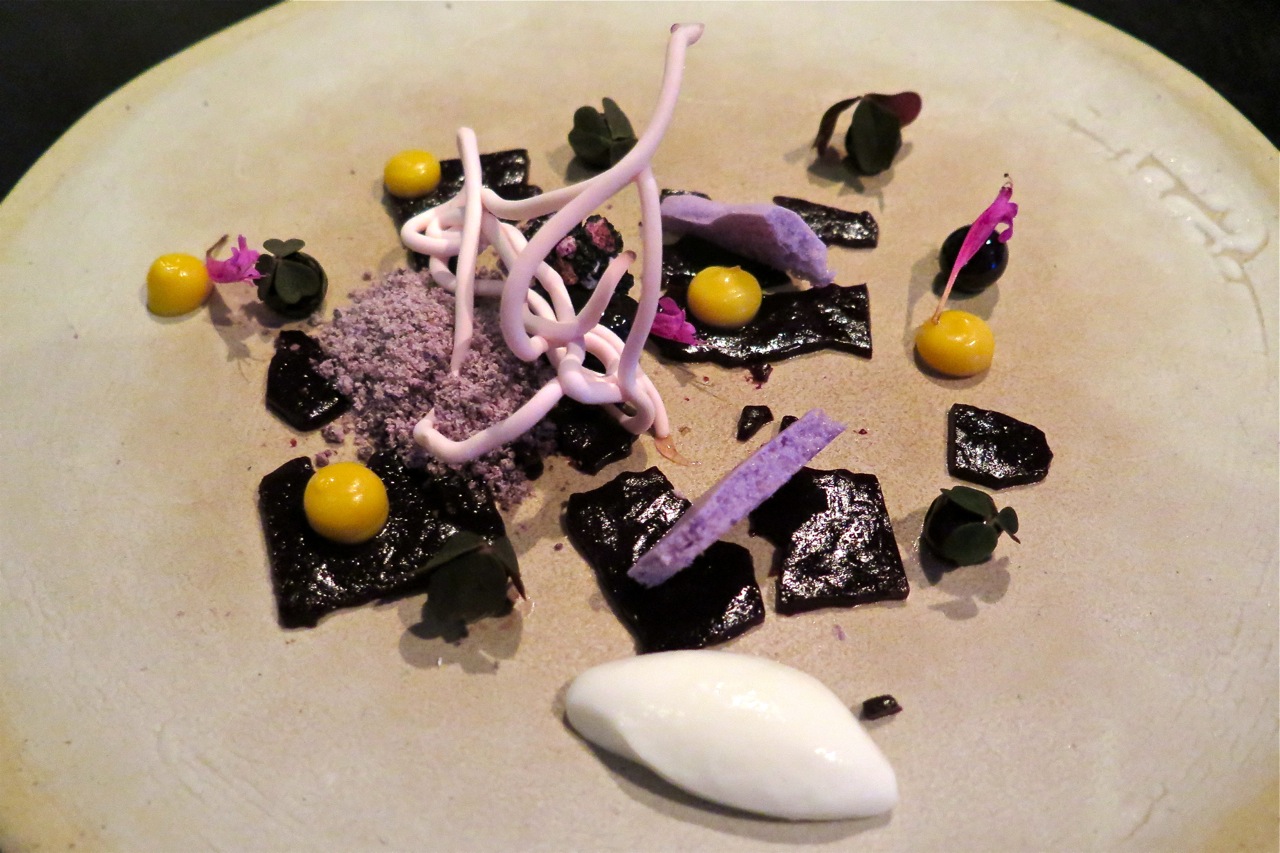 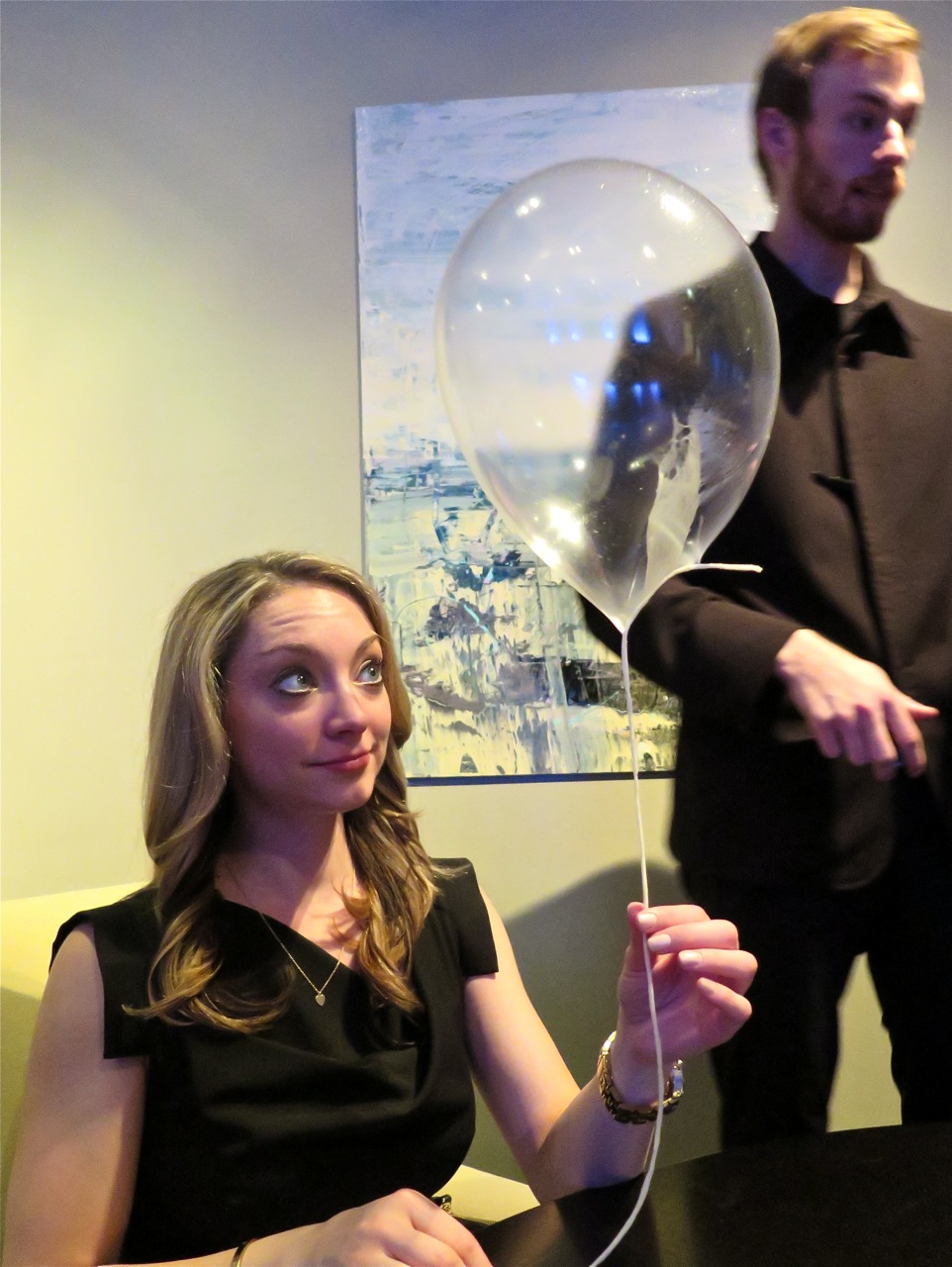 The balloon: by far the most entertaining dish of the evening! This was a green apple flavored balloon made of a thin candy complete with a green apple candy string.  The balloon was filled with helium, so you can guess how they told us to eat it, right?  We were encouraged to suck in the helium and sing our favorite song or talk like a munchkin, so of course we had to oblige.  It was messy but super fun.  We were definitely the most fun group in our room that night (probably because we were the youngest), but we had so much fun chatting and joking with the staff as they came and went. 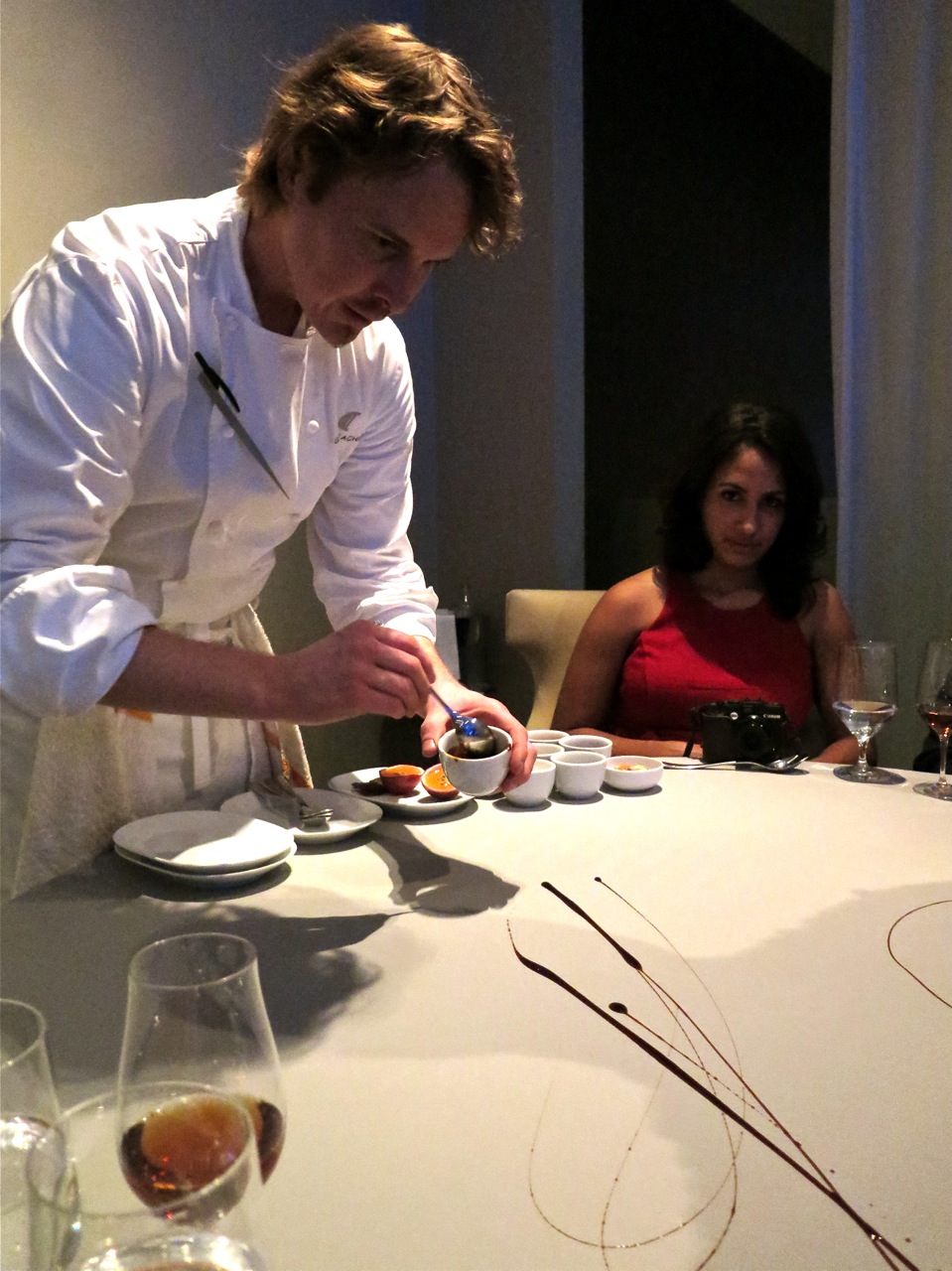 The grand finale dessert, also an Alinea classic served tableside by Chef Achatz and his executive Chef Mike Bagale.  The chefs take turns explaining step by step the ingredients that they add to the table. 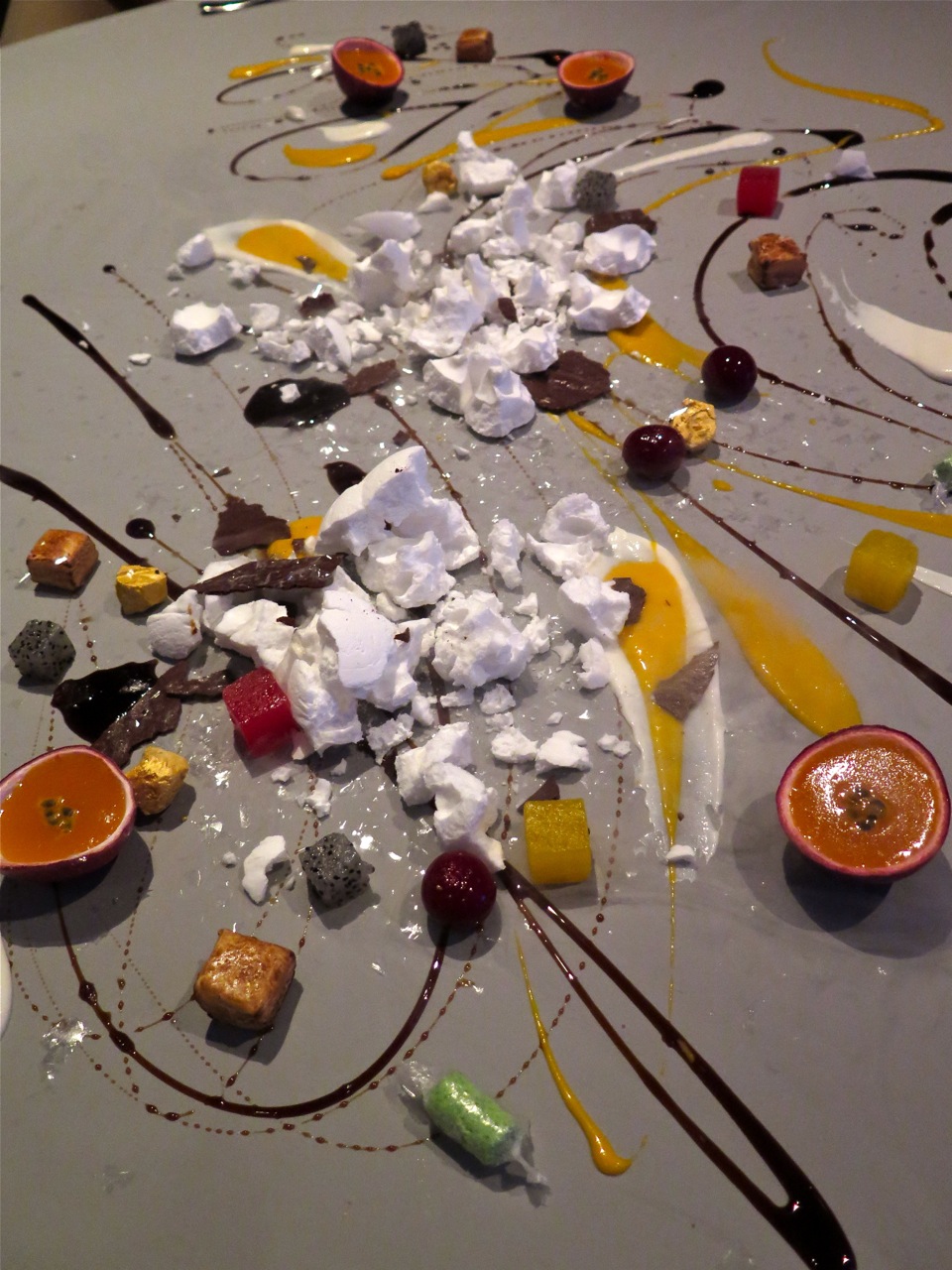 "Tropical Fruit" deconstruction with rum, vanilla, kaffir lime.  The chefs lay down the ingredients like paint strokes on a canvas, including two white balls of liquid nitrogen frozen mousse that they tapped with a spoon at the very end to break into glittering pieces and even sprinkled glitter on top.  It was fantastic to watch: dinner and a show! 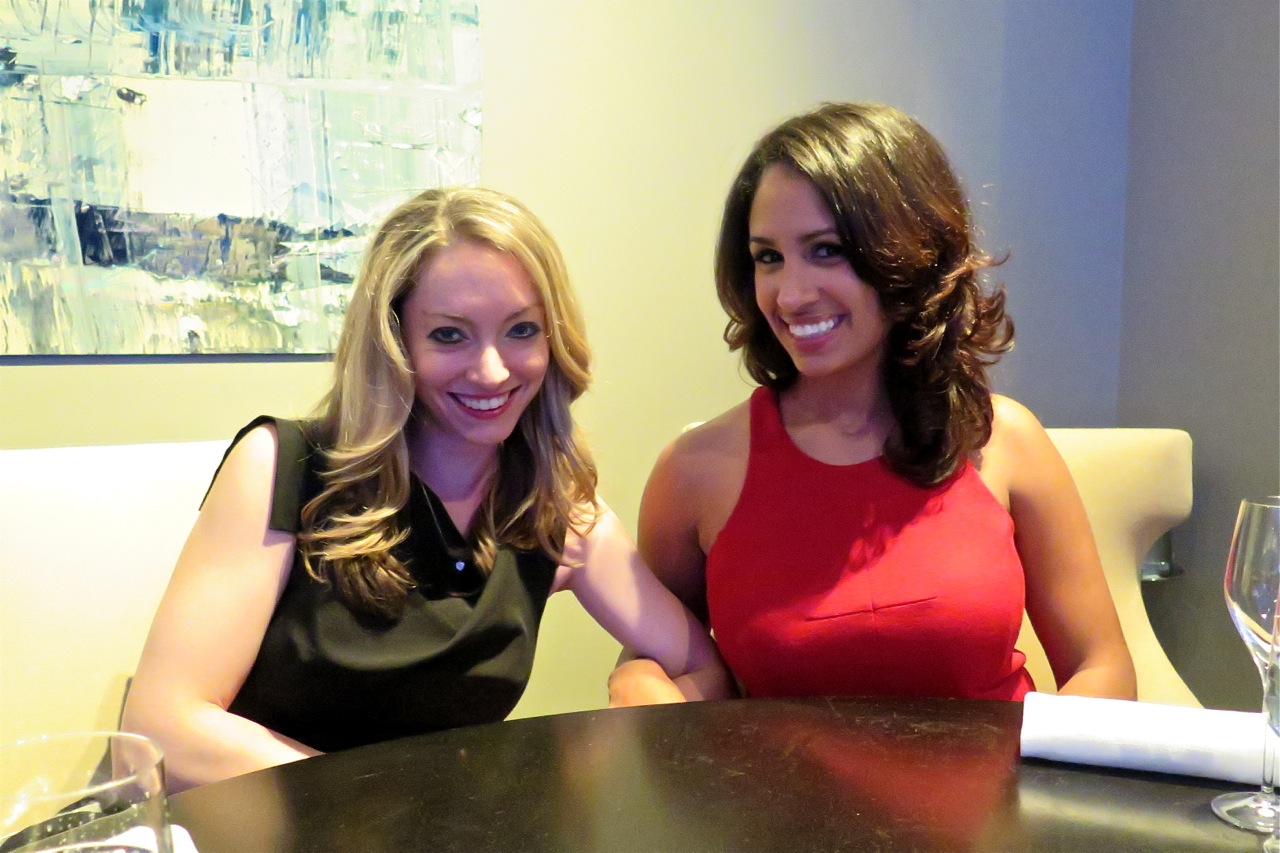 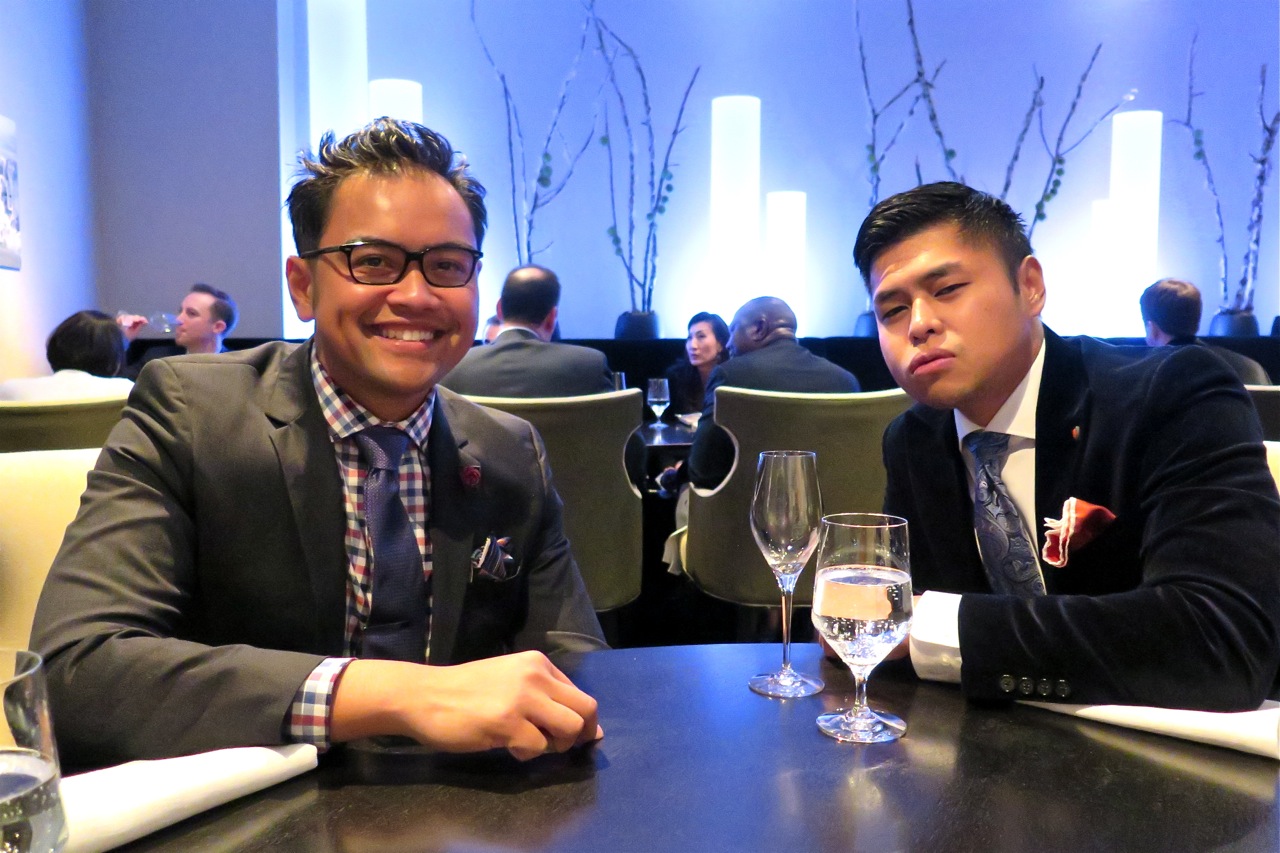 ...and two happy guys.  What an amazing meal!

I hope you enjoyed this visual tour of Alinea, and that I was able to convey to some extent what a treat this dinner truly was.  This was one of the best meals I have eaten thus far in my lifetime, and I am so grateful that we were able to get a table.  Dinner at Alinea was the reason we booked flights to Chicago Halloween weekend, and the meal alone was worth the plane tickets.  Of course, we also enjoyed many other things about Chicago and will return sometime soon - early summer sounds like a good idea because I will not even try to deal with a Chicago winter, ha!  If you want to read more about Alinea, the website is below:

Thank you for visiting my blog today, and I hope you have a great weekend!
Labels: Chicago Foodie Review Travel 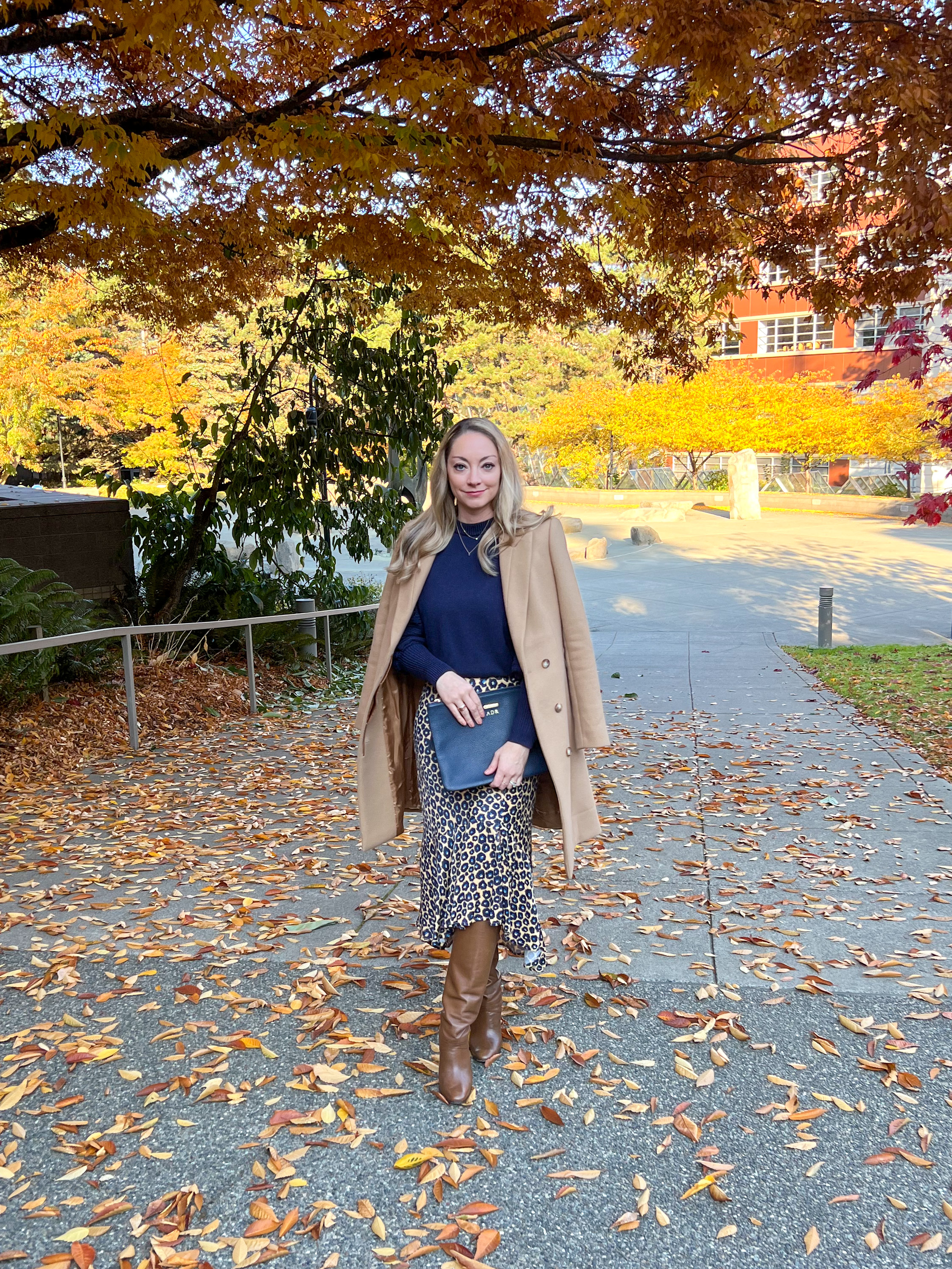 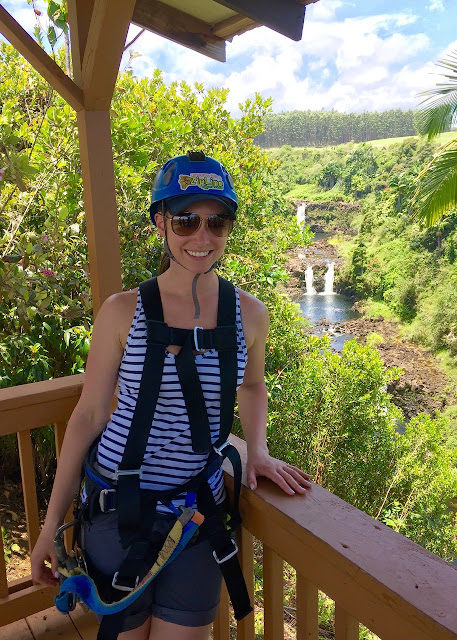 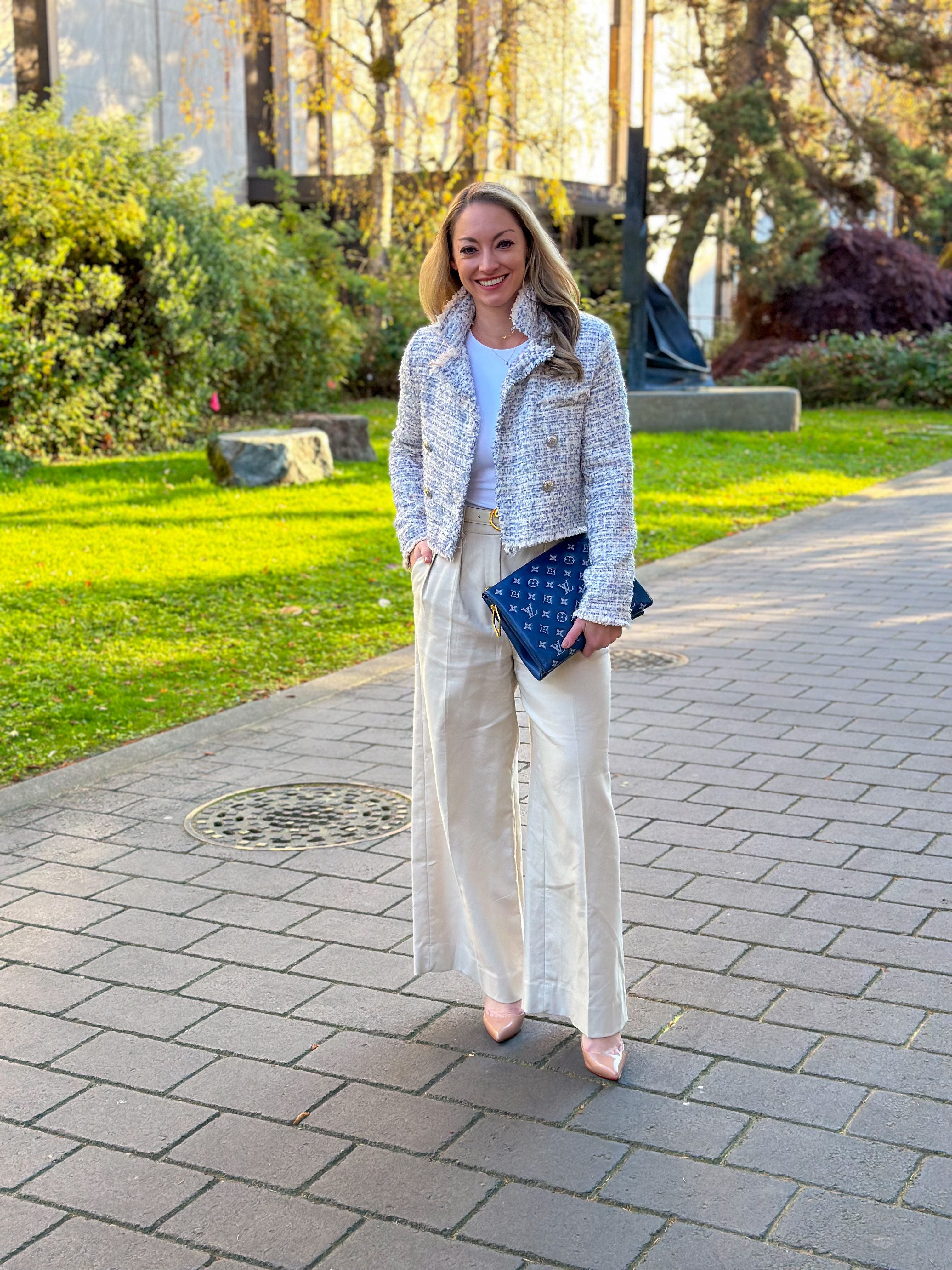