Skip to main content
Labels
Posted by Avec Amber May 03, 2017

If you follow me on social media, you know that my fiancé and I recently returned from a wonderful twelve day trip to Austria and Italy. We have been to Austria several times to ski with a group of dear friends, but after our ski weekend we flew down to Italy to scope out wedding venues and enjoy a week of la dolce vita. Today I am sharing the first of my Italy travel logs with you: our first stop in Pisa on the way to Cinque Terre. We arrived in Florence around 9:00am, grabbed our car and started driving west. In about an hour we arrived in Pisa! We honestly only spent about an hour or so in this city, intending to only make a quick stop so that we could beat the traffic to Cinque Terre. We had plenty of time to walk around the Square of Miracles, check out its surrounding street, and grab some gelato before heading onward to La Spezia. Please scroll through for more photos and details of our morning stop in Pisa! 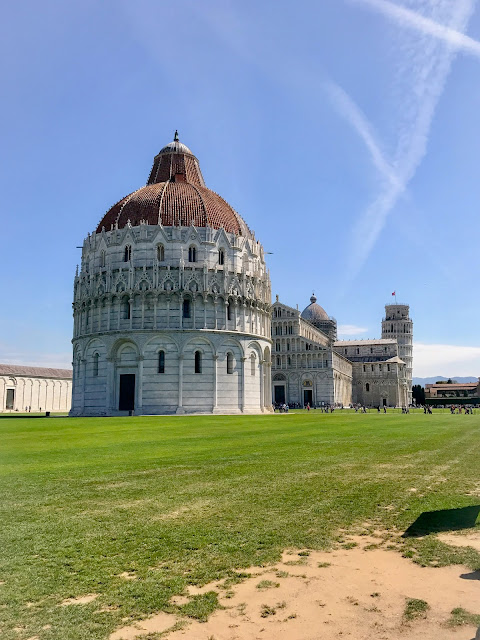 While most people associate the town of Pisa with only the leaning tower, the Piazza def Miracoli (Square of Miracles) contains a gorgeous cathedral, a baptistry, and a cemetary that should not be missed. The Square of Miracles is a world UNESCO heritage site. There are also a number of shops and restaurants placed around the Square for the convenience of tourists. 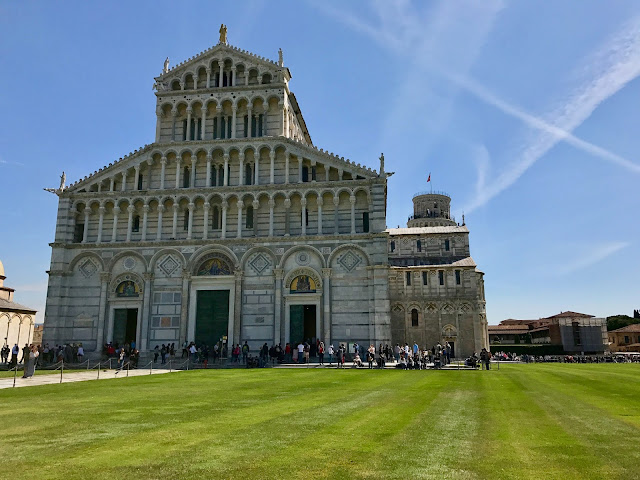 This Pisa Cathedral was the first building of the group to be erected, and construction occurred between 1063 and 1180. The cathedral was built in the Romanesque style, which means that it has rounded arches, smaller windows, and vaulted ceilings. 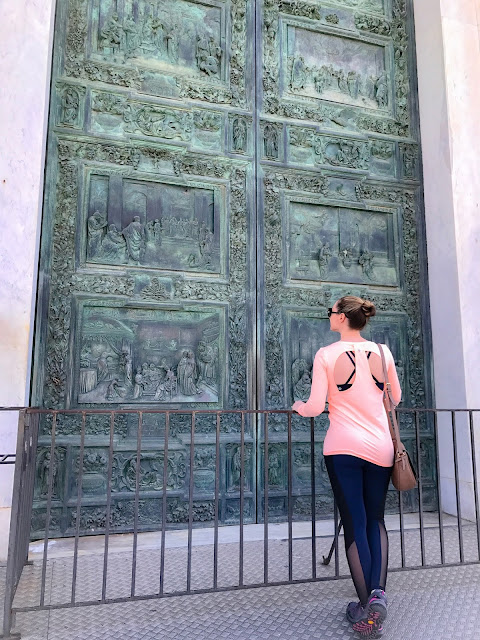 There are three bronze doors on the Pisa Cathedral, sculpted by Florentine artists with images of the life of Christ. These are not the original doors--the original wood doors were destroyed by a fire in 1595 and remade by students of the famous artist Giambologna. They are beautiful works of art! 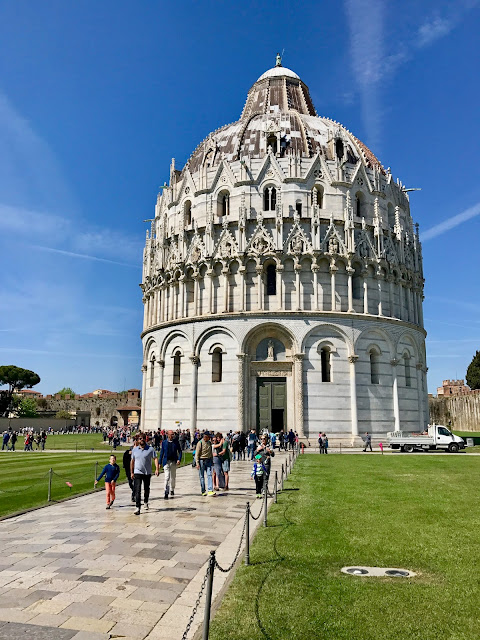 The Pisa Baptistry was built between 1152 and 1363, and is a great example of the transition from Romanesque style architecture to Gothic style. This transition during construction of the Baptistry means that the lower section was built in Romanesque style, with rounded arches, while the upper sections were built in Gothic style, with pointed arches. The entire structure is made of marble and is an impressive sight. 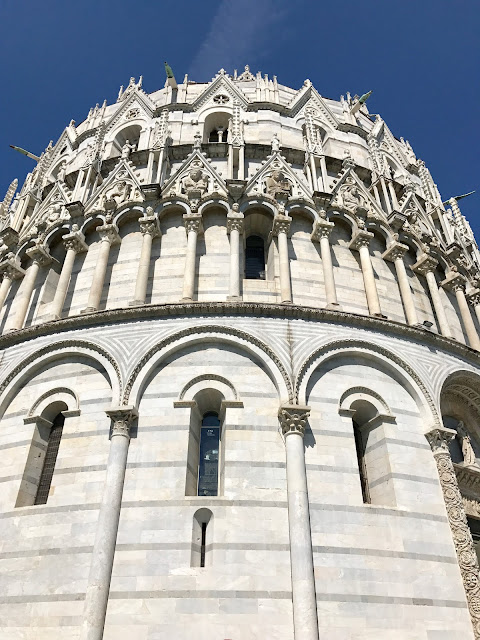 A closer view of the lower portion and upper portion, both made of marble but with very different features. 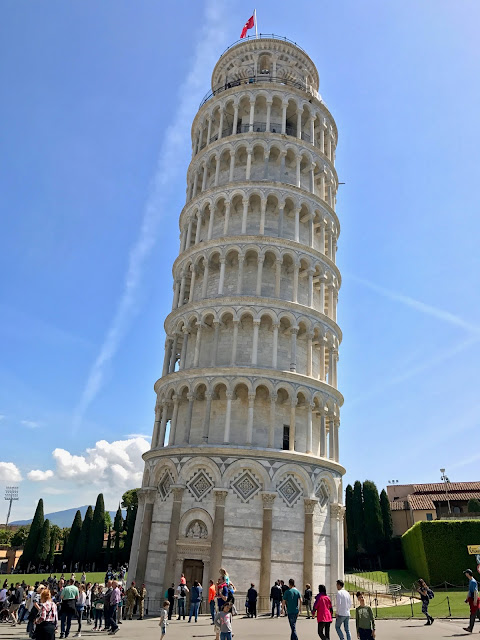 Then, of course, there is the famous Leaning Tower. It was built as a bell tower and is eight stories tall with a total of 207 columns. The bottom story has 15 marble arches, and the next six stories each have thirty arches going around the tower. Apparently the tower started leaning while it was initially under construction (root cause was weak and unstable soil), and restoration work performed between 1990 and 2001 helped to reduce the amount or angle of lean. During the restoration work, tourists were not allowed to climb up the tower but there are now a limited amount of tickets sold per day to climb the 284 steps to the top. We opted not to climb the Tower of Pisa, but instead climbed a different tower in Florence (more on that later!). 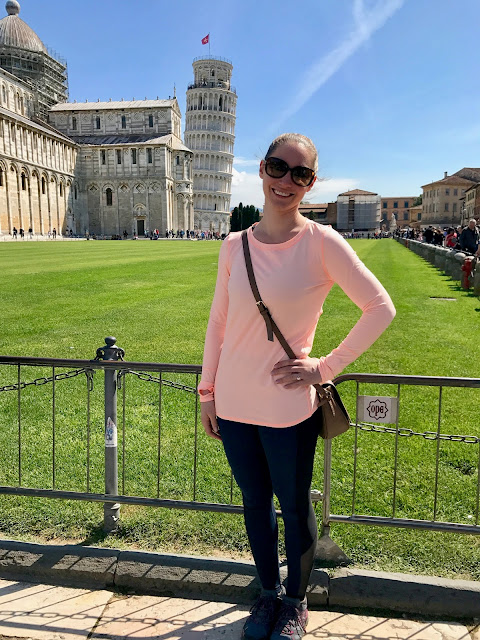 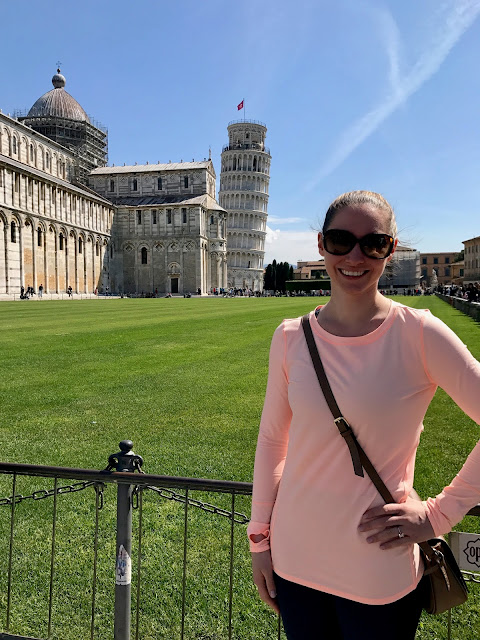 I did take a couple of photos while we were at the Square of Miracles, far enough away from the Tower of Pisa to not have anyone right next to me. It was hilarious to watch people trying to pose with their hands just right in order to get that perfect leaning shot! Since this day was a travel day for us, I kept it casual in mesh leggings, a Zella tee, and my favorite vegan leather crossbody bag! 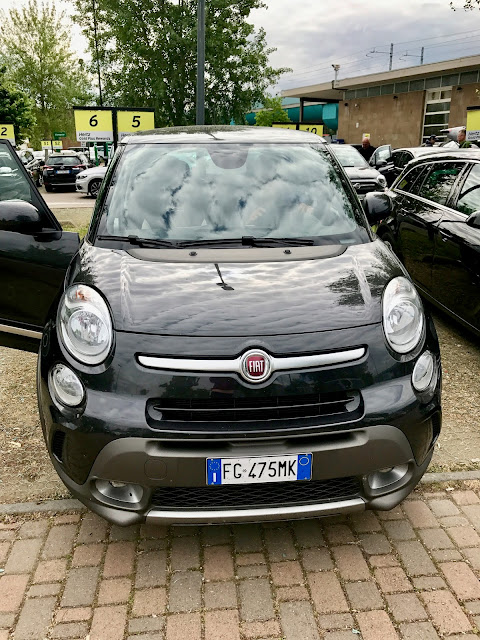 I had to squeeze in a pic of our Italian rental car: a Fiat 500L. When in Italy, you may as well drive an Italian car! This was one of two options that Hertz gave us at the Florence airport for the size of car we reserved. It was a little larger than we needed, in reality, but would be perfect for a group or family of 3-4 people. There was plenty of room for our luggage in the back, plenty of headroom, and it was overall very comfortable. Fiats are starting to gain popularity in the United States, too!

After our quick stop in Pisa, we drove for about another hour to La Spezia. La Spezia is the main town before Cinque Terre and where we parked our car before taking the train into the villages. Please check back next week for my Cinque Terre travel log, and I hope you have a wonderful rest of your week!
Labels: Europe Italy spring Travel 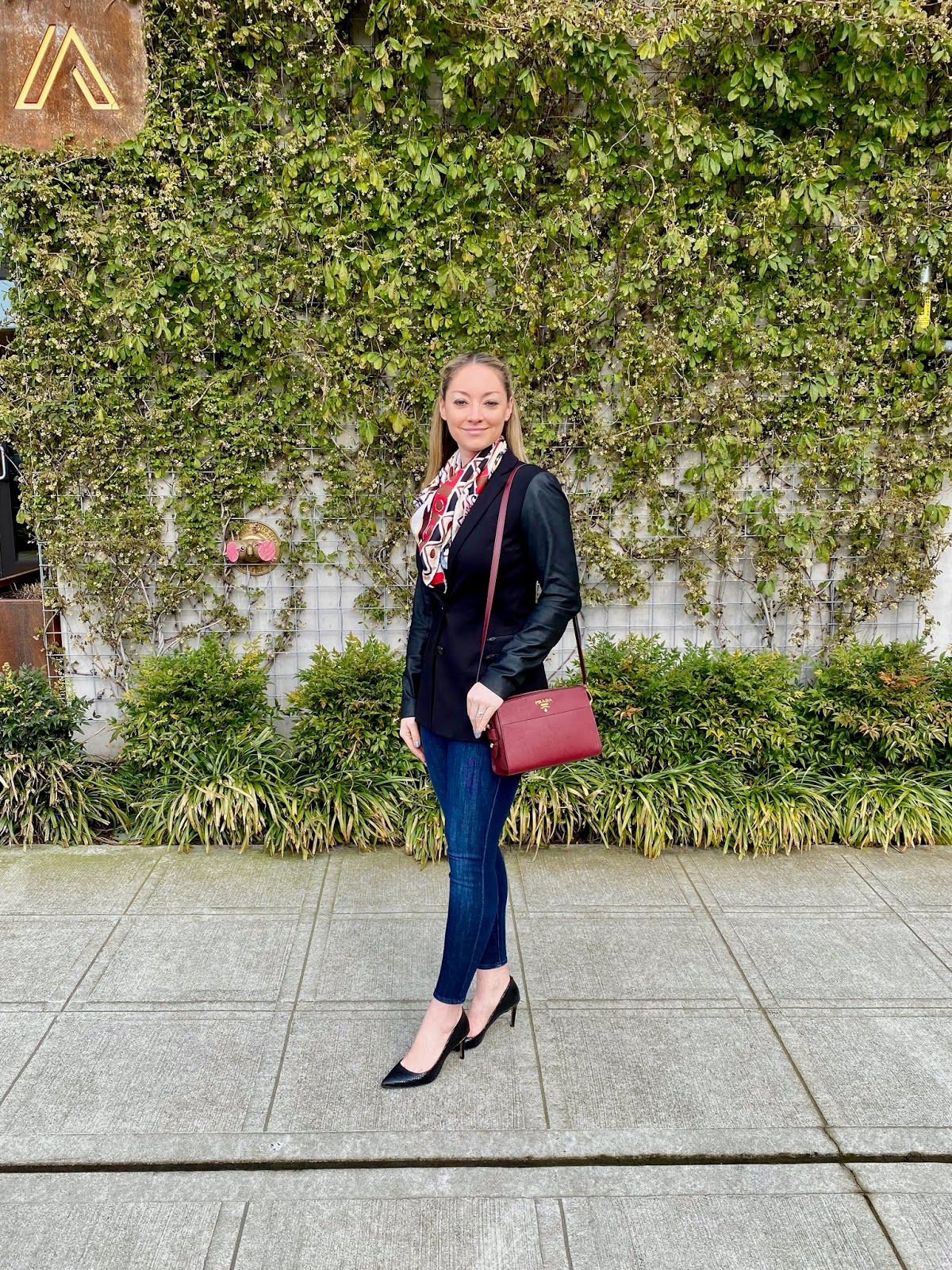 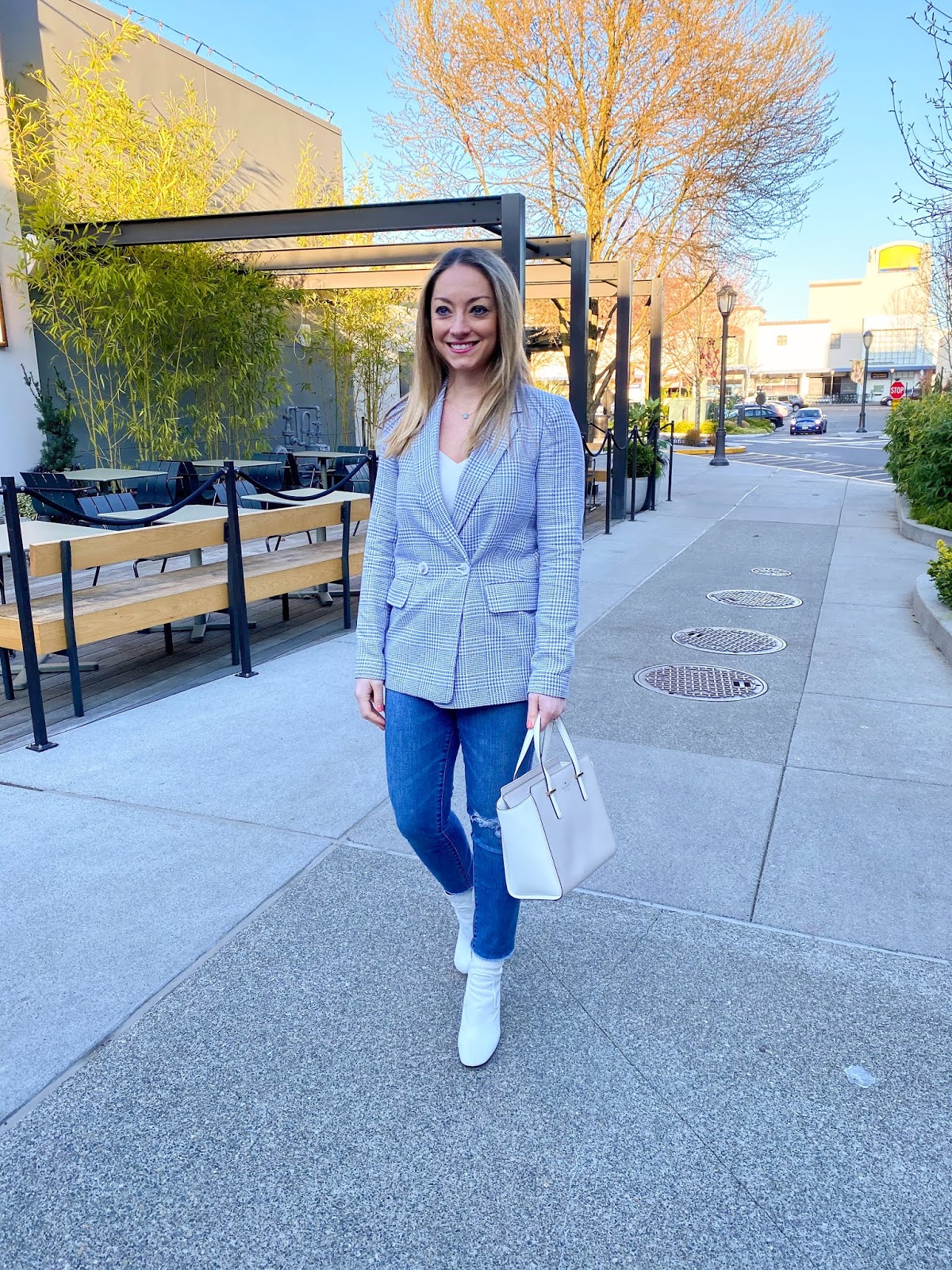 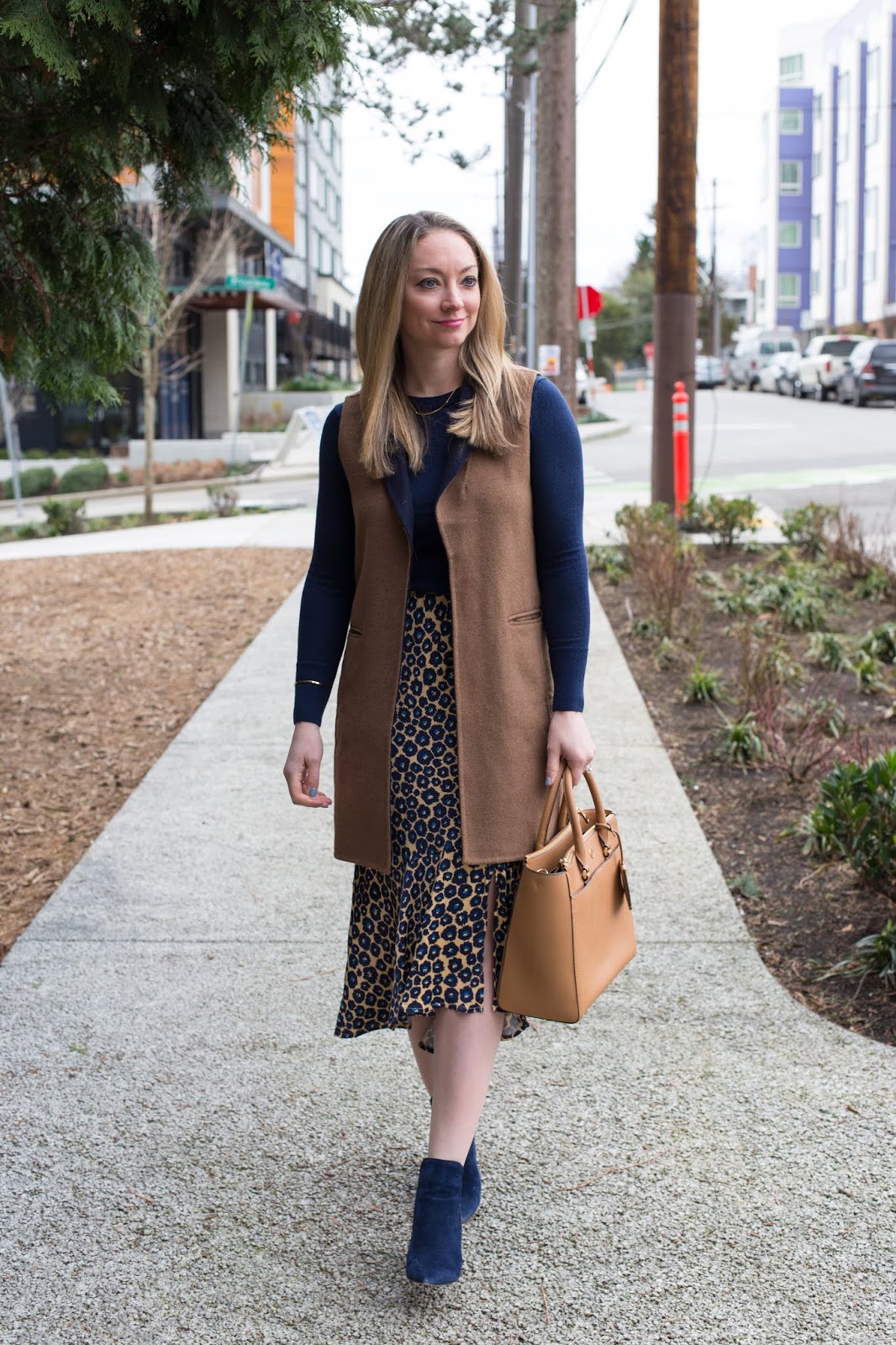